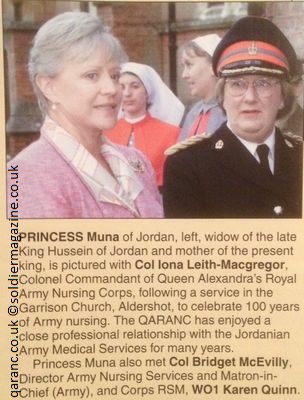 The clipping above is from Soldier Magazine May 2002 and is reproduced here with kind permission.

Princess Muna of Jordan, left, widow of the late King Hussein of Jordan and mother of the present king, is pictured with Col Iona Leith-Macgregor, Colonel Commandant of the Queen Alexandra's Royal Army Nursing Corps, following a service in the Garrison Church, Aldershot, to celebrate 100 years of Army Nursing. The QARANC has enjoyed a close professional relationship with the Jordanian Army Medical Services for many years.