Details and information about the annual Remembrance Day events for serving and retired QARANC members including the Field of Remembrance at Westminster Abbey and the Cenotaph Sunday Parade: 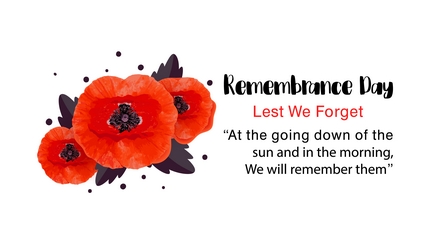 Remembrance Day (also known as Armistice Day) is commemorated each year by serving members of the Queen Alexandra's Royal Army Nursing Corps (QARANC) and retired QA's around the world. This page will give a brief history of Remembrance Day and give details and information of the various acts of remembrance at official war memorials like The Cenotaph.

Remembrance Day is observed each Sunday nearest to the 11 November to commemorate the sacrifice of veterans and civilians of World War I, The Second World War and other wars and conflicts. It is also observed on November 11 to recall the end of World War I on that date in 1918 at 11 am - the eleventh hour, on the eleventh day of the eleventh month. It is traditionally marked with a two minute silence.

The QARANC plot at the Field of Remembrance at Westminster Abbey: 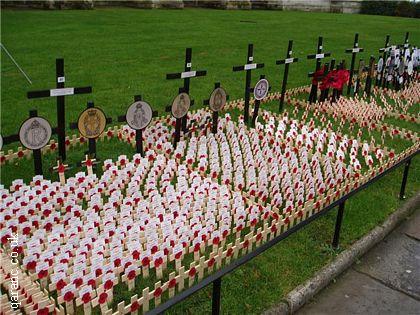 The Duke of Edinburgh speaking to DANS, Col Wendy Spencer in 2008 at Westminster Abbey: 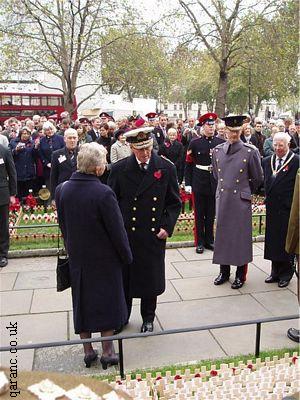 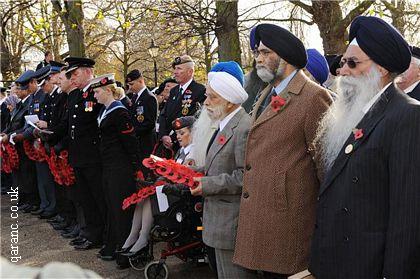 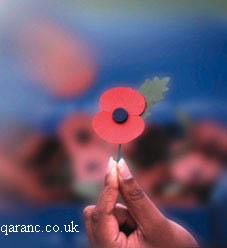 Red poppies are worn as a remembrance to the war dead for several reasons.

Scarlet Poppies grew naturally in Western Europe and were destroyed during the Napoleonic Wars. However they were observed to grow on the barren war torn fields around the bodies of fallen soldiers.

These fields at Flanders were once again destroyed during the fighting of the First World War. A war surgeon from Canada wrote a poem called In Flanders Field in which the poppy came to represent the sacrifice of the lives of his comrades.

The red poppy then became a memorial symbol to the fallen of war and is still worn with pride by many soldiers, ex-soldiers and civilians. It signifies that even in the bloodiest battlefields flowers can bloom and the red colour is a symbol of the blood spilt in battle.

In Britain the poppies are the flat Earl Haig variety whilst in Canada, Australia and New Zealand the poppies are curled at the petals. The artificial red poppies were first made by French woman Madame E. Guérin. 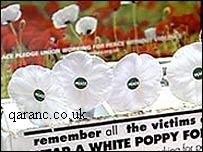 In 1933 the Women's Co-operative Guild introduced a white poppy as a lasting symbol for peace and an end to all wars. These are rarely made or worn in modern years and failed to be taken up: indeed the Royal British Legion refused to accept them and many people refused to wear them.

However in 2006 a Christian lobby group called Ekklesia tried to reintroduce the white poppy so that people could choose between a red poppy or a white poppy. The group claimed that red poppies were too politically correct and stifled debate. They thought that red poppies signified redemption through acts of war and Christians should seek redemption through peaceful non violent actions. The Reverend Mr Andrew Kleissner, the minister of Christ Church a United Reformed Baptist Church in Ipswich, Suffolk sold white poppies to his congregation in 2006.


Each Remembrance Sunday there is a Royal British Legion Act of Remembrance parade at the Cenotaph, in London. Serving and retired members of the QARANC represent the Queen Alexandra's Royal Army Nursing Corps.

The Cenotaph at Whitehall in London was designed and built by Edwin Lutyens at the request of the then Prime Minister Lloyd George. It means Empty Tomb in Greek.

The original Cenotaph monument was not intended to be an enduring memorial to the war dead and was a wooden and plaster construction. However when it was unveiled at the first anniversary of the Armistice in 1919 it was covered in wreaths by those wishing to remember the sacrifice of the war dead. A more fitting and weatherable memorial was built. It was constructed using Portland stone and was unveiled in 1920. The inscription reads "The Glorious Dead".

There is an annual Remembrance Service and Parade each Sunday closest to the 11 November at 11am at the Cenotaph to commemorate British and Commonwealth servicemen and women who died in the two World Wars and later wars and armed conflicts. The reigning monarch, princes, princesses', the Prime Minister, religious leaders, politicians, representatives of state and the armed and auxiliary forces, gather to pay respect to those who gave their lives defending others.

The format of the Remembrance Service at the Cenotaph has not changed much since the first service in 1921. Each regiment and corps line up to their respective positions and VIP's take their positions. Hymns are sung, prayers are said and a two minute silence is observed. Official wreaths are laid on the steps of The Cenotaph. The Remembrance Service ceremony ends with a march past of war veterans.

The order of line-up can be read on the British Army Order of Precedence page.

There are a limited number of tickets to the Cenotaph event made available to ex QA members. These are available upon request by booking them via the QA Association.


The QA Association will be represented at the Cenotaph in Whitehall on Sunday 11th November 2018, the Centenary of the end of the First World War. Many other members will be attending services throughout the country. 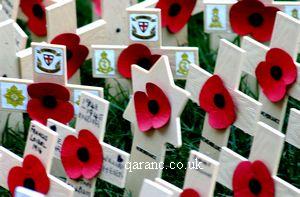 The Field of Remembrance at Westminster Abbey was first opened in 1928 in the grounds of Westminster Abbey. It was created as a way for people to commemorate loved ones lost in battle and during wars and conflicts.

Small remembrance crosses are planted by individuals or groups. Each small wooden cross has a poppy in the centre and there is a space for a message of remembrance to be written. The planted crosses remain on display for one week during the period of remembrance.

Following a request from the RBL, the Abbey and the Metropolitan Police this event was made tickets only. The tickets are limited and are available via the Association Secretary and QA's are asked to meet at the QARANC plot at 1030 hours for the 1100 hours event. 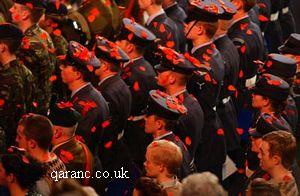 The Saturday evening before Remembrance Sunday BBC Television broadcast a service of remembrance on BBC1 live from The Royal Albert Hall in London.

Each corps and regiment are represented by six serving members and the QARANC are usually represented by two QA officers, two senior non commissioned officers and two junior ranks. They are announced on screen with a brief resume of where the QA's are serving. They march proudly down the steps of the Albert Hall and take their seats.

A service of remembrance is held and a two minute silence is observed. Other people who take part in this festival include The Queen, senior members of the Royal Family, retired members of the Army, Navy and Royal Air Force and the much loved Chelsea Pensioners.
There are performances by military bands and singers such as Katherine Jenkins. Tickets can be purchased at the Royal Albert Hall website at www.royalalberthall.com
The event normally starts at 2pm though broadcast on television in the evening.


If you have a QARANC Remembrance Day event that you would like listed on this page then please Contact Me with information such as dates, times, locations, point of contact and any photos.

In October 2007 the National Memorial Arboretum opened and it included a Queen Alexandra's Royal Army Nursing Corps Memorial. There are photographs and mor information about this on the QA Memorial page.