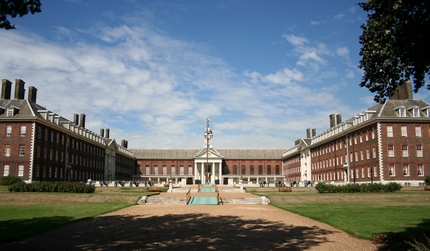 The Royal Hospital Chelsea in London dates back to the 17th Century when King Charles II wanted provision made for the care of old and injured soldiers. The original building was designed by Sir Christopher Wren and the first Chelsea In-Pensioners were admitted in February 1692.

The buildings has changed over the years and seen many extensions added. For example an Infirmary was built in 1809 and had to be demolished after bomb damage sustained in the Second World War. The Infirmary is often described as the best nursing home in the UK and is not just a hospital, but is a mixture of nursing home and hospice.

The facilities are once more being upgraded which includes a modernised care home and improvements to the Long Wards. Plans are even afoot to allow female ex-soldiers to be admitted to Royal Hospital Chelsea!

Barbara Whilds was the first QARANC Chelsea Pensioner at the age of 68 years. She described her new lifestyle in Vol 14 No 6 of The Gazette where she talked about the classes she undertakes on a range of subjects like photography, carpentry, art and music. Entertainment includes bingo, whist nights and dinners and special occasions such as the Florence Nightingale Service and the Not Forgotten Association Garden Party. She also manages a garden allotment. In 2012 she was presented to HRH The Countess of Wessex, the Colonel In Chief of the Queen Alexandra's Royal Army Nursing Corps. Barbara also represented the RHC during the London Olympic Games, the Albert Hall Remembrance Service and the March Past at the Cenotaph.

A Chelsea Pensioners CD has been released with proceeds going towards the refurbishment of the Chelsea Pensioners accommodation such as the long wards. The Chelsea Pensioners sing favourites such as Men In Scarlet, Bless 'Em All, I'll Be Loving You, Goodnight Sweetheart, The White Cliffs Of Dover, Pennies From Heaven, I'll Be Seeing You, Now Is The Hour King And Country, If You Were The Only Girl In The World, A Nightingale Sang In Berkeley Square, Abide With Me, Jerusalem, Danny Boy, The Boys Of The Old Brigade and When I Grow Too Old To Dream.

The Chelsea Pensioners CD also has tracks with singers such as Katherine Jenkins, Dame Vera Lynn, Janey Cutler, The Soldiers and The Choir Of The Royal Hospital.

Chelsea Pensioners' have always been held in high esteem by all members of the Queen Alexandra's Royal Army Nursing Corps not least because of their mischief making and humour! Resplendent in their scarlet coats and tricorne hats Chelsea Pensioners can still be seen in and around London.


Sadly none of the QARANC.co.uk team served at the Royal hospital Chelsea during our elderly care training and would love to expand this page with more details about the hospital and include a photograph. If you are a former or serving member of the Queen Alexandra's Royal Army Nursing Corps we would love your help.

From Friday 30 January 2009 BBC2 TV broadcast a documentary called Chelsea Pensioners: Once A Soldier. Each thirty minute television programme featured different aspects of life as a Chelsea Pensioner such as becoming a Chelsea Pensioner, the Men In Scarlet berths, giving guided tours for tourists at Royal Hospital Chelsea, taking part in a parade for Her Majesty The Queen and getting fitted for the famous red uniform and tricorn head dress.