Information about the Army Medical Services during the First Gulf War Operation Granby of 1990 to 1991 including the Field Hospitals such as 33 General Surgical Hospital and 22 Field Hospital:


The Gulf War of August 1990 saw the largest deployment of the QAs since World War Two. In the UK it was codenamed as Operation Granby whilst in the United States of America the codenames were Operation Desert Storm and Operation Desert Shield.

Two QARANC officers were posted to Saudi Arabia along with other members of the tri-service to work with staff at the Saudi Arabian Military Hospital in Dharan.


In September 22 Field Hospital Aldershot deployed to Bahrain Island and then forward to Wadi Al Batin in Northern Saudi Arabia. In October 1990 the staff of the Cambridge Military Hospital Aldershot were mobilised as 33 Field Hospital to Al Jubayl on the East coast of Saudi Arabia under the leadership of Colonel Eric Gruber von Arni the Matron and Chief Med Nursing Middle East (cited in the book
Sub Cruce Candida: A Celebration of One Hundred Years of Army Nursing

. He describes working under ColPro (Collective Protection), how he and his colleagues coped with Scud missile attacks, wearing respirators and NBC protective suits, vaccinations against biological warfare such as anthrax and botulinism, taking NAPS tablets with the worry over side effects and running the Bahrain International Marathon representing the RAFWH.

33 General Surgical Hospital (also referred to as 33 Field Hospital) opened in a tyre factory and at its full capacity during the height of the Gulf War had 600 beds and 936 military staff (Cited in Vol 11 No 2 of The Gazette of the Queen Alexandra's Royal Army Nursing Corps Association).


Other QARANC and RAMC units deployed to the GulfWar included a conglomeration of BMH Hannover, Berlin, Munster and Rinteln, who started training at Chester Camp in December 1990 and were deployed 10 January 1990 to 26 March 1991 as 32 Field Hospital and the Territorial Army (TA) unit 205 (Scottish) General Hospital. They were classed as the frontline field hospital, and were about 50km behind the frontline.

The staff of 32 Field Hospital decorated their entrance with a garden and the book Sub Cruce Candida: A Celebration of One Hundred Years of Army Nursing

has a picture of what they nicknamed The Desert Rose Home of 32 Field Hospital. This Commanding Officer's rose garden was well cared for during the conflict and proved therapeutic for the staff and was not an unusual practice by QA's during periods of war and conflict. On the QARANC.co.uk World War One Photographs page there are Sisters of the QAIMNS tending to their gardens in Basra Hospital, Mesopotamia. 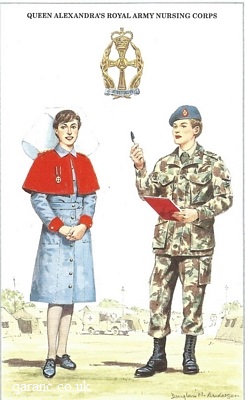 The image above is a postcard produced in 1991 from artist Douglas N. Anderson from his watercolour painting depicting a QA Nursing Officer Captain in ward dress and a Corporal in combat dress with a Field Hospital background. It formed part of The British Army Series entitled No. 81 Queen Alexandra's Royal Army Nursing Corps. It was printed by Albany House, Coleshill, Birmingham and published by Geoff White Ltd, Blackwell, BS19 3JA, Avon. (with thanks to Terry Hissey)


33 Field Hospital Reception Department treated 6000 patients of which 3000 became in patients and over 200 surgical procedures were performed (cited in the book Sub Cruce Candida: A Celebration of One Hundred Years of Army Nursing

has many photographs from the Gulf War including the staff of 22 Field Hospital filling sandbags during Operation Granby in Bahrain, the setting up of the main war, a church service, a street trader near to 22 Field Hospital in Bahrain, the tented hospital at Wadi al Batin, the main entrance of 33 Field Hospital at Al Jubayl in Saudi Arabia, a tented ward at 33 Field Hospital on Christmas Day, the recovery ward, the visit of General Sir Peter de la Billiere the Commander of the British Forces, staff dressed in NBC kit against a Scud attack, examples of NBC drill posters with the face of Saddam Hussein and the Medical Reception Station (MRS) Old Port Barracks Al Jubail.

Memories of a Nursing Officer who served with 212 Field Hospital (Birmingham) in Kuwait and 34 Fld Hosp in Iraq can be read on the DKMH Catterick page.


The QAs returned to the region over a decade later during Operation Telic.

The QAs received many honours for their service in the Gulf War and these include:

The Queen has been graciously pleased to give orders for the following appointment to the Royal Red Cross in recognition of service within the operations in the Gulf:

A.R.R.C.
To be Ordinary Associates of the Royal Red Cross,
Second Class:

(With thanks to Terry Hissey for the London Gazette information)