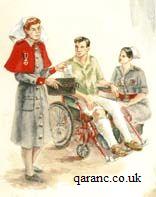 
British army nurses who have the Queen's Commission hold the following officer ranks:

The first QA Officer to be gazetted to the rank of Brigadier in the British Army was Dame Anne Thomson the Director Army Nursing Services (DANS) and Matron-in-Chief (Army) in 1950. Prior to her promotion the first member of the QAs to become a Brigadier was Dame Katherine Jones who held the rank during an emergency Commission (cited in the book Queen Alexandra's Royal Army Nursing Corps (Famous Regts. S)


The last four army officer ranks are for general staff officers and no QARANC officer has been promoted to this level.


It should be noted that though the Officer Cadet is a rank the holder does not hold the Queen’s Commission.


The first non nursing officer commissioned to the QARANC was Lieutenant Margaret Stephenson in March 1959. Her previous rank and service was WOI in the WRAC (cited in the book Queen Alexandra's Royal Army Nursing Corps (Famous Regts. S)

She trained as a clerk and served at Hindhead, Aldershot and GHQ Singapore

Then in 1958 authority was given for the creation of a small cadre of Non Nursing Officers to support and relieve nursing staff from onerous clerical duties. She was selected to spearhead this and appeared before the Regular Commissions Board and completed the Officer course at Hindhead. She was appointed MBE for services to Non Nursing in 1976. Posting and positions included CMH Aldershot, DKMH Catterick and the QA Centre as Adjutant, Admin Officer, Deputy Commandant and Chief Instructor. She died peacefully at home on the 24 May 2012 (cited in The Gazette Vol 14 No 6).


UK Army Officer establishment figures for the Queen Alexandra's Royal Army Nursing Corps for 2004 was at a strength of 260.

For the Other Ranks figures please see the QARANC Junior Ranks page.

The photograph below shows some QARANC Officers enjoying a visit from Santa in the Far East. Read more about this and view more photos from this collection on the BMH Singapore page. 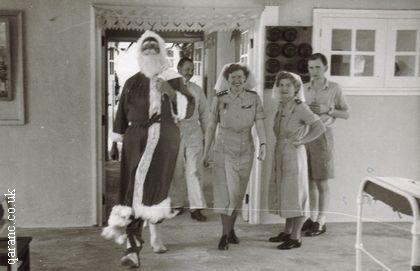 By tradition members of the Royal Family are Field Marshals. This includes Her Majesty The Queen and His Royal Highness The Duke of Edinburgh.