Information about the Ministry of Defence Hospital Unit Frimley Park:

Ministry of Defence Hospital Unit Frimley Park (MDHU Frimley Park or MDHU FP) opened in February 1996 as a result of the 1995 Defence Cuts and Rationalisation for Medical Services. Many of the staff including members of the QARANC (Queen Alexandra's Royal Army Nursing Corps) from the Cambridge Military Hospital, Aldershot transferred to MDHU Frimley Park when the CMH closed in 1996. The first Matron of MDHU Frimley Park was Lt Col June Kennedy RRC. 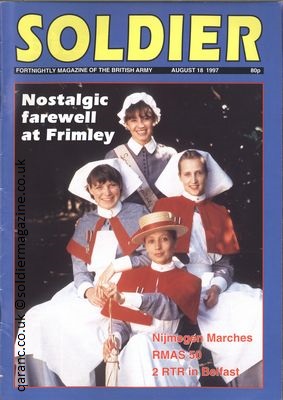 This wonderful photograph, from Soldier Magazine 18 August 1997, depicts the staff of Ministry of Defence Hospital Unit Frimley Park Hospital dressed in a range of army nursing uniforms. The photo was taken on the occasion of the farewell of Lt Col June Kennedy RRC, the first Matron of the Unit that opened in 1996. She moved to the Duchess of Kent Military Hospital Catterick after her farewell on a 'tug' electric trolley!

has photos of QAs working on the Dame Margot Turner Ward and the Chavasse Ward at the MDHU Frimley Park Hospital, Surrey.

The Soldier Magazine of 13 Nov 1995 cites that the first senior medical officer was Lt Col Peter Fabricius RAMC. It further stated that on opening staffing at the MDHU would be 24 army consultants, 36 junior doctors and 140 nursing and other professionals. It estimated that Frimley Park would care for an extra 6000 extra inpatients as a result of the CMH closure.

Frimley Park Hospital National Health Service (NHS) Foundation Trust has a 700 bed capacity and is a general hospital. It opened in 1974 to provide care for North East Hampshire and West Surrey. As well as civilian patients it now cares for MOD patients. QAs work throughout the hospital. 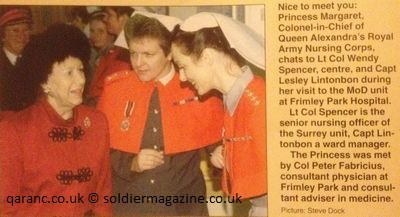