It is with much excitement that we report that the Territorial Force Nursing Service medal rolls are now available to view online. These TFNS records were thought lost, however an online exclusive collection of 5-6,000 names, can now be viewed thanks to research undertaken by Phil Cooper, the Technical Director of Forces War Records. Phil discovered them in a donated box whilst searching through the Army Medical Services Museum archive. These have subsequently been digitised for online search with the help of the museum's staff. 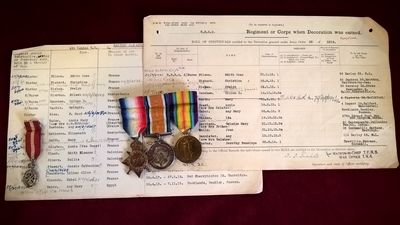 The QAIMNS Reserve and the Territorial Force Nursing Service were formed after the Territorial and Reserve Forces Act of 1907. By 1908 there were 3000 members of the TFNS. Their role was to serve around Great Britain in the 23 Territorial Hospitals (TH). These were controlled by the War Office and under Army administration (cited in It's a Long Way to Tipperary British and Irish Nurses in the Great War by Yvonne McEwen). When the Great War started each Territorial Hospital had a maximum bed capacity of 520 beds which were staffed by 91 nurses with a reserve of 30. Members of the TFNS also served during the First World War with the Expeditionary Force. This war saw their number soar to around 8000. 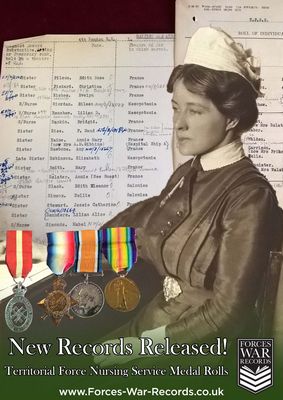