If you would like to share your photographs or pictures with serving or former QARANC members and people with an interest in the Queen Alexandra's Royal Army Nursing Corps then please use the e-mail address or mailing address on the contact page.


Please do give us a brief description of the photo so that we can describe the picture to readers of the website. We would especially welcome any historical pictures of QA's and the places they have served such as Netley or the Royal Herbert Hospital.


We would encourage you to scan the original QARANC related picture and e-mail us a copy; we cannot be responsible for any pictures or photographs lost in the post. Digital photographs are most welcome.


Can you please help with further information about what we think is a Sports Medal. 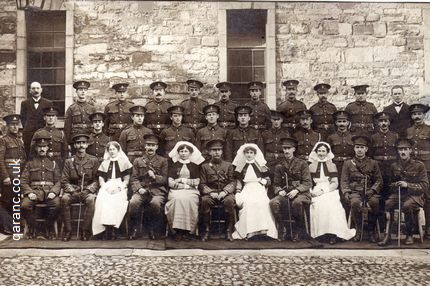 A reader is seeking further information on this photo he found in a collection belonging to his great aunt who he believes might have been a nurse in Dublin Castle tending to soldiers from the Somme. The Red Cross hospital there was setup by Lady Aberdeen in 1915. Family members think it might be taken in Ireland possibly Dublin and near the 1916 'rising' period.

They recently discovered that prior to her secondment to Dublin she was a nurse somewhere in England and knew Florence nightingale as there was correspondence.

The following photos are thought to be of a bracelet which belonged Sarah (Daisy) Ann Louisa Salmon who was in the QAIMNSR and served in France from about mid 1916. Her Grandson would like to know if the QAIMNSR bracelet was official issue or a personal purchase and what does the initials CONG stand for? The front of the bracelet states Republic Francaise. 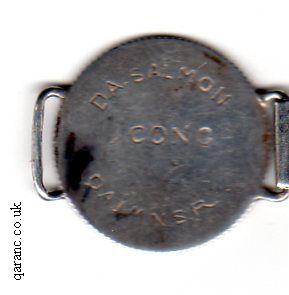 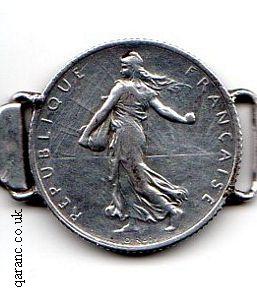 A reader thinks the inscription stands for Congregational, as religious denomination was often identified in this way.

Below is a photograph of a group of third year nurses who names are written above each nurse, sister and matron. It was taken in 1916 at Camberwell Infirmary. One of the nurses, McAlister, was lost on the HS Salta in 10 April 1917 (front row, second left). Daisy Salmon is on the top row, second from the right. 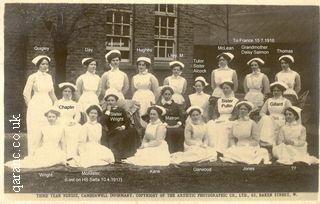 
The super photograph below was kindly provided by Angela Burgoyne. She recognises the QA officer as Major Lilias M Tibbs who saw service in Singapore and went on to become a Matron. The picture is entitled 'About to begin the tour of the Hospital June 9 1956'. Unfortunately Angela does not know which military hospital the photo was taken at nor who the other dignitaries were though she thinks some may be Naval or Red Cross staff? Angela recalls Major Tibbs as being a wonderfully modest lady and would, despite having witness dreadful things, only modestly say of her lifetimes work I'm just an old has-been.

If you can help to identify the other personnel or the location please contact us. 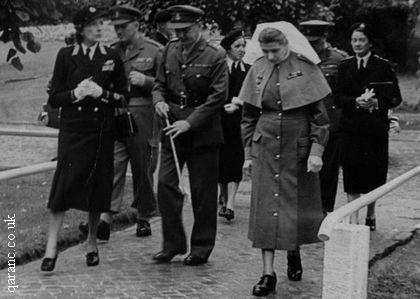 Qaranc.co.uk were delighted to hear from retired Major Daphne Brewer-Dudfield who informed us that it is Lady Louis Mountbatten on the far left. She also thinks that the photo with Lady Louis Mountbatten was not taken in Singapore on the date shown because she arrived in November 1955 and Lady Mountbatten had just visited Singapore prior to her posting. Major Daphne Brewer-Dudfield also notes that as the people in the photo are not wearing tropical uniforms, but winter uniforms, it is not likely to be in a hot place.


Larger photos can be seen at:


Oh What a Lovely War

The photos below were taken by photographer Adrian Bowd during the Lewes Theatre Club June 2009 production of the First World War stage musical Oh What a Lovely War which was devised by Charles Chilton, Gerry Raffles and Joan Littlewood's Theatre Workshop. It was directed by Pat Shrimpton. 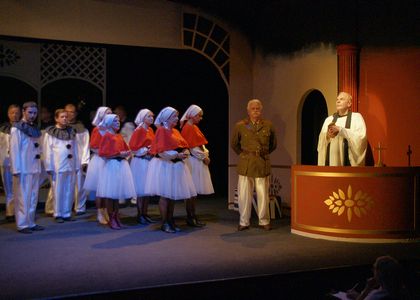 It is tradition in productions of Oh What a Lovely War for the actresses playing the nurses to wear pierrot costumes and the director and dressmaking member made five QAIMNS tippets. The costumes were then hired out to another Group who are performing the play at Hever Castle 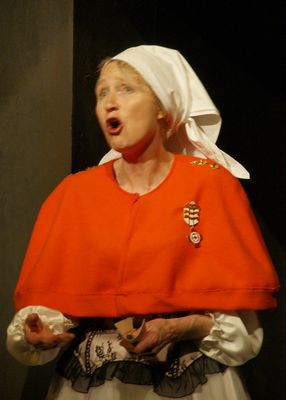 Qaranc.co.uk would like to thank Adrian Bowd and Pat Shrimpton for kind permission to display the photos of Oh What a Lovely War.


The photographs below are of a double sided brooch that belonged to Catherine Sarah Jones who served in the Queen Alexandra's Imperial Military Nursing Service (QAIMNS) during the First World War. She was christened Catherine Sarah Jones and born in 1888 in Harlow, Essex, England and then took her mother's maiden name and changed her name to Katherine Sarah Beale Jones and an inscription on the back of the brooch says B.K.S.JONES B.R.C.S (British Red Cross Society ) and O.S.J.J (Order of Saint John of Jerusalem).

There is an inscription on one side of the brooch in letters which look to be Turkish - they are not Arabic but there are letters like capital Omega,P,V,O,T,Y,Epsilon,a six backwards and an M with a small Omega on the top.

Her nephew is trying to find out some information about the brooch and his aunt. Click on the pictures to see larger photos.

Her sister recalls that she trained as a nurse somewhere in the midlands beginning with 'L' but then paid for herself to go to Dublin to the Rotunda hospital for her midwifery training. The family have her 1914 - 1915 WW1 star medal and think she must have enlisted into the QAIMNS quite early on during the Great War. Her nephew describes her as a fairly eccentric but very knowledgeable old aunt who died in 1970 aged 82.

If you can help identify the brooch and give a history of it then please contact me. 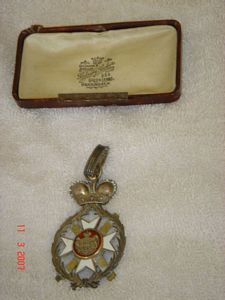 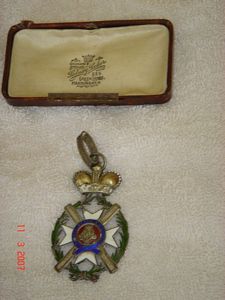 JK Militaria have kindly identified the brooch as being a Serbian Order of Takovo - Commander's class which was no longer awarded after World War One and was a fairly rare award. The Serbian Order of Takovo - Commander's class was issued for various services to Serbia (or citizens of) prior to and during the Balkan Wars and WW1. For more information visit www.jkmilitaria.com 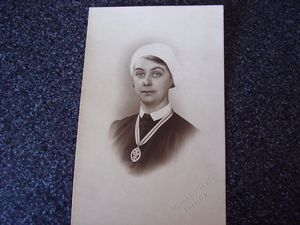 The photograph above was thought to have been of a World War I nurse. It is a postcard photo and we were asked to help identify the medal and ribbon she is wearing. The nurse is thought to be Miss Jepson who was nicknamed Jeppie. Staff Nurse Milly Jepson served during the Great War. The postcard photo was taken by a studio in Leicester called Fisher & Potter Ltd. Click the photo to see a larger image.

We received the help of Sue at Scarlet Finders who is a specialist at tracing former nurses and military nurses. Here's what Sue was able to say - within an impressive 5 minutes of my e-mail!

The badge is that of Queen Victoria's Jubilee Institute - if you see one close up, it's the letters QVJI intertwined, and came in different metals depending on the grade of the nurse. The QV Jubilee Institute nurses were the original district nurses, and later on, the 1930s I think, the name got shortened to 'Queen's Nurse' which stuck until the 1970s. Even I did my district training in the days of 'Queen's nurses'. So they were trained nurses who worked in the community, normally under the auspices of the local council, rather than hospitals. An internet search for Queen Victoria's Jubilee Institute throws up lots of hits.

My immediate impression was that the photo was post war - probably early 1920s, particularly in view of the hairstyle, and that is born out by the attached extract from the British Journal of Nursing, dated 12 November 1921, page 307 which gives Millie Jepson, as a QVJI nurse being transferred to Clacton [right hand column]. As she has a file at The National Archives, it should give more details of her time during the war, and hopefully details of where she trained.

By sending photos to QARANC.co.uk you give permission for us to publish them on the website.

Please note that any photographs and images that appear on the www.qaranc.co.uk website will be watermarked with qaranc.co.uk to prevent editors, journalists and other websites lifting the photo or image and claiming it is theirs and to prevent hotlinking. This in no way implies that the photo is the copyright of this site but is done to avoid bandwidth theft and over usage. With permission from the owner we always add an acknowledgement to the photo owner and link to their website if they have one. Qaranc.co.uk are most grateful to image owners for their kind permission to display their historically important images.

If you would like to use any pictures from the qaranc.co.uk site then please contact us using the link on the right of this page and we will seek permission from the owner.

Below is a copy of a Christmas card sent from British Military Hospital Kluang Malaya with the tri service cap badges: 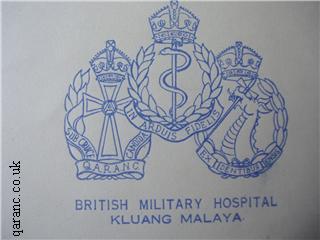