This philatelic tribute was issued in 1972 to celebrate 70 years of the QA's and depicted the ward dresses of Sisters of the Queen Alexandra's Imperial Military Nursing Service of 1902 and the Queen Alexandra's Royal Army Nursing Corps of 1972. The cover was franked on 27 March 1972 (QA Corps Day) by the British Forces 1199 Postal Services and issued by the Philatelic Officer QARANC Aldershot. 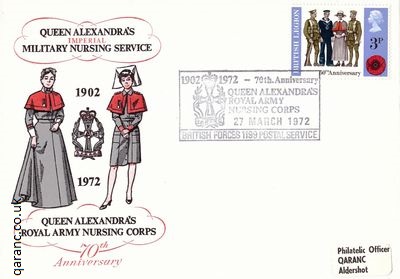 The Golden Jubilee of the British Legion featured the post-Great War uniforms of the Army, Navy, QAIMNS and Royal Flying Corps. 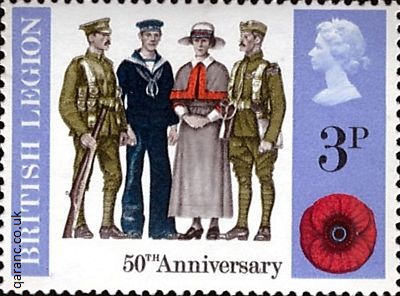 With thanks to Dr Stuart Menzies of the MediTheme Magazine, the Medical Philately Study Group, which featured the stamp and cover in their November 2014 Vol 33 No 4 edition. He now publishes it as eMediTheme and readers can get a free pdf download which prints out in A4 format to all who send him their email address and asks for the journal eMediTheme. It is published quarterly Feb, May, Aug, Nov. approximately. E-mail stuart@swsm.co.uk