Staff Nurse Ella Cooke served for two and a half years, from November 1914, before she was sadly killed while crossing tram lines at Alexandria, Egypt on 8th September 1917, while on active service. 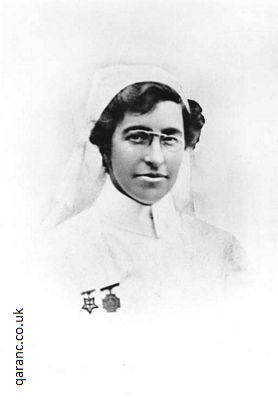 Her service number was 2/RES.C/1266. She is interred at Alexandria (Hadra) War Memorial Cemetery in the care of the Commonwealth War Graves Commission.

Below is a copy of the Graves Registration Report Form. Note the two Lieutenants from the Royal Army Medical Corps. 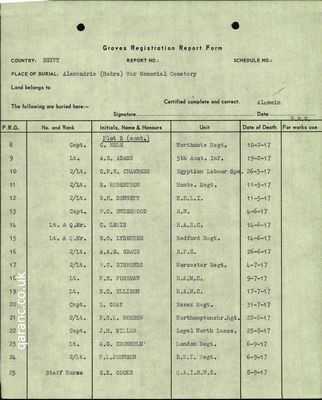 Ella Cooke and her twin sister Ada were born in Auckland in 1885; the youngest two of a family of eight children - seven girls and a boy. The family lived at 110 Grafton Road, below Park Road, and attended St.Sepulchre's Church.

In June 1907, Ella completed her nursing training at Auckland Hospital and joined the staff of the Cook Hospital, Gisborne. Throughout 1909 she was engaged in private nursing and in 1910 joined the staff at Hawera Hospital where she remained until the end of 1913. Ella Cooke was then appointed Native Health Nurse in the Waikato based in Ngauruawahia; her responsibilties lay within the area bounded by Kawhia, Mercer, Te Kuiti and south of Morrinsville.

However, on 3 July 1914 Ella left New Zealand with her sister Lily on board the S.S.Niagara bound for Vancouver on the first stage of a journey across Canada and the United States to England; Lily, an astute business woman, had been appointed buyer for Mackie Logan in London and Paris. Britain was already at war by the time they reached New York, and their departure was delayed due to reported German activity in the Atlantic. The ship finally sailed on a course far from the normal shipping lanes.

It was reported in Kai Tiaki, the Journal of the New Zealand Nurses' Association, that "Nurse Cooke intends to offer her services for six or seven months to fill the gap in some hospital caused by nurses going on active service."

France was desperately short of trained nurses. On November 19 1914, Ella Cooke was one of a group of fourteen nurses which left England to serve with the French Flag Nursing Corps; she served in a base hospital at Bernay; near Rouen for six months before returning to England. 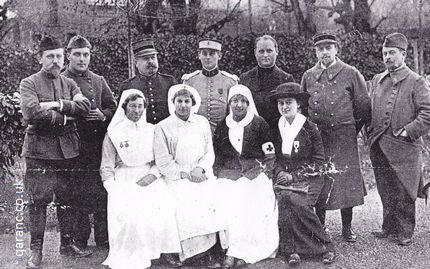 Ella is pictured on the left to the front row. The third lady from the left, wearing the Red Cross armband, is the Comtesse De Sesmaison. Commandant Courand is the third left in the back row.


Ella intended then to return to New Zealand but was persuaded to join the Queen Alexandra's Imperial Military Nursing Service Reserve. See her Form of Application to the QAIMNSR, her Application to the War Department and Declaration for the Army Medical Services. After some weeks of training at Aldershot, she was posted to No.17 General Hospital at Alexandria, Egypt at the end of September 1915.

She was very happy and popular there, "played and sang well and was always ready to give pleasure." On a Saturday off duty exactly two years after arriving in Alexandria, Nursing Sister Ella Cooke was killed instantly whilst taking a short cut across a railway line behind the hospital. She was honoured with a full military funeral and buried in Hadra Cemetery.

Below is a copy of the Index of the Alexandria Hadra War Memorial Cemetery No. E 1 Commonwealth War Graves 1914-1921: 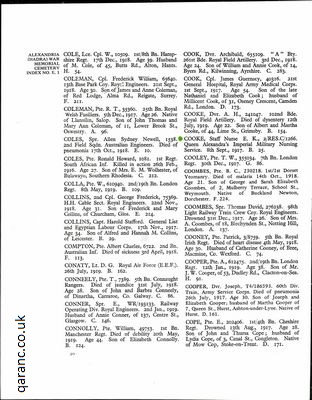 Her name is inscribed on the World War 1 Nurses' Memorial in York Minster, England. There is more information about this on the War Graves Memorials Nurses page.


Below is a copy of the Imperial War Graves Commission Report Form. Note the other members of the QAIMNS which are: 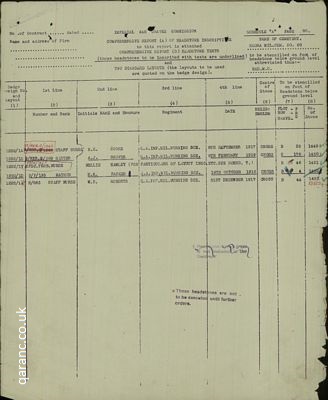 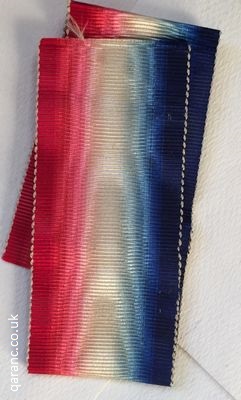 See also her First World War Commemorative Next of Kin Memorial Scroll and Letter from King George from Buckingham Palace.


KAI TIAKI, the Journal of New Zealand Nurses' Association reported on her death in their January 1918 edition, which was reprinted from the British Journal of Nursing:

We regret to announce the death of Sister E.K.Cooke, who was accidentally killed on Saturday afternoon last, while attempting to cross the train lines near Fleming. Sister Cooke was one of the staff of the 17th General Hospital and had worked there faithfully for two years and was also in France for eight months before coming to Egypt.

She was one of Queen Alexandra's Reserve nurses, having gone from New Zealand to join up in England as soon as the war began. She will be much missed by the Matron, Medical Officers, Sisters (8 of whom came out from England with her) and patients.


See her Army Form W 3165 Claim for Gratuity on Cessation of Service.


We think that there are photos of her on the Ambulance Flotilla and the Hospital Barges pages.