History and information about the British Military Hospital in Gibraltar: 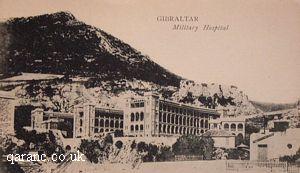 The British Military Hospital in Gibraltar was opened in 1901 to care for the British Forces based on Gibraltar and nearby sailors.

Gibraltar is nicknamed The Rock and BMH Gibraltar was nicknamed the Wedgewood Castle because of its blue colour which can be seen in the photo of RNH Gibraltar further below. Above is a much older photograph of BMH Gibraltar.

There are more photos of BMH Gibraltar in the book Sub Cruce Candida: A Celebration of One Hundred Years of Army Nursing

. This includes pictures of the Matron and her nursing staff.

describes the Military Hospital in Gibraltar as being situated on the high ground towards Europa Point and is built of the grey stone of the Rock itself. 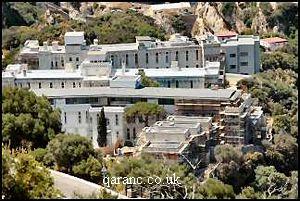 The Spanish Civil War took place between 1936 to 1939. During this time BMH Gibraltar cared for troops in the conflict. This included 55 casualties from the bombed German Battleship Deutschland which had been hit by two bombs whilst lying in anchor off Ibiza (cited in the book Queen Alexandra's Royal Army Nursing Corps (Famous Regts. S)


BMH Gibraltar was already running at full capacity because the British Navy ship HMS Hunter had sustained casualties after hitting a mine whilst on neutrality patrol near Almeria in early May 1937 and BMH Gibraltar was also looking after some casualties from HM Hospital Ship Maine on the 15 May 1937. Most of these casualties were suffering from burns.

So four QAs were flown out, by flying boat because the airstrip had not yet been built, to care for the remaining German casualties. This included Colonel Gertrude Morgan who was later awarded the German Red Cross Medal on 21 November 1938 with a certificate from Adolf Hitler, a year before World War Two. At the time of receiving this award Colonel Morgan was serving at BMH Quetta.

The German Navy were so grateful for the QAIMNS for nursing their comrades that a visiting sister battleship crew gave a dance party for the QAs. The German Admiral Commanding presented the decorations to the QAs.

During the Second World War survivors from attacked convoys leaving or travelling to Malta were treated at BMH Gibraltar whilst their ships were repaired in the Naval Repairs Yards. The twelve nursing sisters of the QAIMNS (Queen Alexandra's Imperial Military Nursing Service) were the few women on the island when the British families were evacuated in 1939 and Gibraltese women were evacuated to either Great Britain or Morocco (cited in Quiet Heroines: Nurses of the Second World War

In between the hard ward duties caring for wounded sailors the QA's enjoyed the hospitality aboard docked ships of the H Fleet like the Ark Royal. The sight of QA's playing cards, dancing or playing deck tennis was so common that the Captain of the ship considered the QA sisters part of his team. Sadly the sisters were to witness the Ark Royal being destroyed after a run to Malta when they were watching their loved ship from a hill on Gibraltar. They rushed back to BMH Gibraltar to prepare for casualties.

The most common injury that the QA's treated was burns, made more difficult to treat because this was at a time when penicillin was not yet discovered. Brenda McBryde describes a unique way that Sister Zena Potter helped the brave sailors cope with the pain of dressing removal when a cargo of champagne had been saved from a sunken Italian ship. The burns patient would be given a glass of champagne before the dressing was removed and then another once completed! Read more about nursing during the Second World War at BMH Gibraltar in in Quiet Heroines: Nurses of the Second World War

A letter from a Nursing Sister to the Matron In Chief can be read in Grey and Scarlet : letters from the war areas by army sisters on active service

where she writes about the Rock changing into a Fortress when Italy entered the war. She describes the civilian evacuation, the curfew and the construction of defences. The letter, written in 1942, describes the patients as members of all three services as well as merchant seamen, members of the Censor Staff, Spanish dockyard workers and members of the Gibraltar Defence Force and Security Police. War casualties were usually from ships and aircraft and included from time to time prisoners of war.

The Nursing Sister continues her letter by describing the aircraft raids and the treatment patients needed when she was on duty in the Casualty Ward which included re-packing wounds, applying tannic acid to burns and administering injections of morphia and laying out the dead. Further accounts narrates the excellent results of encasing burnt limbs in Plaster of Paris for several weeks and how a ship’s artificers made a replica of an Iron Lung for poliomyelitis cases.

As WWII progressed a second hospital was built in Gibraltar deep inside the Rock in case the above ground hospital was destroyed by an air raid or Gibraltar was invaded via nearby Spain. Though the Spanish were neutral there was a fear that German or Italian troops would overrun Spain or be given access to the country

A team of Canadian Engineers tunnelled into The Rock and created a cavern that was warmed by electric fires and filled with beds and medical and nursing equipment. The engineers had even included flushing toilets and a fully equipped operating theatre. Water was collected which had dropped from the rocks and filtered. This theatre was said to have been of better quality to the one within BMH Gibraltar because it had been equipped by the American Lend_Lease (Quiet Heroines: Nurses of the Second World War

). Home comforts for the QA's and other hospital staff included a NAAFI store, Sister's Mess, kitchen and sitting room.

In anticipation of using the underground hospital in Gibraltar the staff would exercise emergency evacuation of their patients and had this time down to seven minutes.

The rubble from the underground hospital was used to build an air strip at the racecourse on Gibraltar Bay and this was used during the British and American invasion of North Africa in 1942.

There is a great deal written about BMH Gibraltar in Quiet Heroines: Nurses of the Second World War by Brenda McBryde and we do recommend reading the book to read first hand accounts from nurses who served during the Second World War in other fields such as Singapore, France and Hong Kong. Other stories about the nurses who served at BMH Gibraltar include Sister Zena Potter who dated a man called Lieutenant Deakin who was nicknamed Spider and who had a vast knowledge of radar and acted as a spy. She went on some missions with him to act as a decoy and alias and she lead an extraordinary life taking her to normally inaccessible places like Tangiers and being able to meet other spies like secret agent Ian Fleming who would go on to write the James Bond books.

She was accompanied in one mission with fellow QA Daphne Stevens and another man and upon their return were adversely judged by their Matron who had no knowledge of their dangerous duty to their country rather than going on trips with men. However she was deeply trusted by these undercover men and was one of only two nurses charged with caring for them when they became ill or injured. Many years later Zena Potter read the autobiography of Odette Samson who was a French Resistance heroine and recalled her visiting one of the undercover spies when he was a patient at BMH Gibraltar at the height of WWII in 1942.

Zena and Lt Deakin married after the war: a respectability that would have been approved by her Matron! They had children and were in turn blessed with grandchildren.


In his book A Few Deeds Short of a Hero

Robert Widders reminisces about his service at Gibraltar and tells a funny story of the apes of the Rock. One ape was trained to sit on people's shoulders and pose for photos. One day an officer decided to get the ape to sit on his head for a more humorous photograph. Unfortunately the ape decided this would be a suitable spot and time to open its bowels!