The Military Maternity Hospital in Woolwich, London served the wives of the military and their babies during the 1960s and 1970s. Local civilians were also cared for in the building that was located on Woolwich New Road, opposite the side of the Royal Artillery Barracks. The area is now a housing estate. 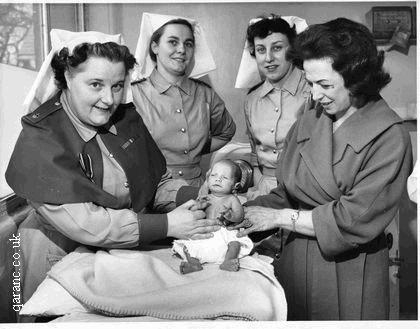 The photo above was taken in March 1962. If you can help with other information, please contact me.

Pictured above, with kind permission of Soldier Magazine is James Michael Faithorn, the last gunner baby born at the Military Maternity Hospital Woolwich, with his parents Warrant Officer 2 and Mrs Moira Faithorn. He was born on the 2 February 1977. The 27-bedded hospital closed that March.

The article in Soldier Magazine reads:

James is the end of an era.

James Michael Faithorn, born on 2 February 1977, and the third son of Warrant Officer 2 and Mrs Moira Faithorn, will most probably have the rare distinction of being the last gunner baby to be born in the Military Maternity Hospital, Woolwich, which closed in March.

Well over a hundred years have passed since gunner births were first recorded in Woolwich, the home of the Royal Artillery, but the actual date of the first birth at the Female Hospital at Woolwich is lost in the mists of time.

I asked Major Cooper what would happen to the Service families who came from as far away as Chatham and Maidstone.

"Expectant mothers must sign on with either the Army or their civilian doctor who will make the necessary arrangements with the local civilian hospitals and eventually when the mothers and babies' hospital in Woolwich closes, most expectant mothers will go to the Greenwich District Hospital," she said.

"The ante-natal and post-natal clinics which have been attached to the maternity hospital will continue," said Mrs Kathleen Trump and Mrs Dora Lewis who between them have 36 years of looking after Service families in Woolwich.

Asked how many babies they have looked after during all those years, they said. "I have never thought about it." But on quick calculations, Kathleen and Dora must have cared for 81,000 babies born in the hospital alone.

The clinics in Master Gunner Place will most probably move to the military hospital and hopefully other premises will be found in the Brookhill area for the other clinic.

"We both have seen mothers whose daughters have come back and started their own families here. It just won't be the same when it closes."

The hospital was friendly and homely, so important when often mothers do not have their husbands with them nor their immediate family, so the extra comfort and help which this small hospital has given has undoubtedly helped many mothers when no family back-up was close at hand.

Nurse Lance-Corporal Lesley Irvine delivered her first baby, a girl, at the hospital. "It was a tremendous thrill and I will be sad to go," she said. This was endorsed by Lance-Corporal Anne Crowthorne who will be marrying in April.

Matron will be moving to Dharan in Nepal where she will be matron of the British Military Hospital "Going to Nepal is outside our normal work. It is a great posting for me," she said. "I am thrilled."

Surrounded by cards and flowers, Mrs Moira Faithorn was full of praise for the staff and the care she had received and said the closure would indeed be a great loss to families.

It won't be long before the bulldozers move in and another ancient monument will disappear from the Woolwich scene.


The last baby born was gifted a silver bangle from the staff to celebrate her birth on 28.2.77.

There are more memories of Military Maternity Hospital Woolwich on the Royal Herbert Hospital page.