Junior Ranks and senior non commissioned ranks of the QARANC are:

The first non commissioned ranks were admitted to the QARANC in July 1950. Private Ann Catherall was the first junior rank of the QAs with the army service number Q1000001. She was presented with a clock momento (cited in the book Queen Alexandra's Royal Army Nursing Corps (Famous Regts. S)

This was presented by Gen Sir James Steele, the Adjutant General, during the opening of the QARANC Depot and Training Establishment in Hindhead. More can read on the QA Nurses Training Centre page.

This photo, taken in December 1966, shows Ann Catherall on the left. It was taken during a Christmas sketch by junior ranks dressing as officers. They managed to borrow the capes and caps for the occasion and she is wearing a dark wig to cover her platinum blonde hair. She played the role of Matron. In the middle is Sue Bristow-Jones, who played Deputy Matron, whilst the contributor of the picture Celia Glew (now Deakin) “volunteered” to play the part of Detatchment Officer/Personnel Officer.

The sketch was called Cinder Ella. The plot saw Pte Ella coming in late, having spent time with her Swedish boyfriend. They were singing (borrowed from Gilbert & Sullivan):

Ann went on to have a long career and became a Sergeant and was posted to BMH Dhekelia in 1966 where she married a Finnish soldier serving with the UN Peacekeeping Force and went to live in Helsinki.


Other first non commissioned officer ranks in this first intake included Privates J. Thomas and V. Henfield. There was also Private Jessie Reeves who had transferred from the ATS (Auxilliary Territorial Service) and won best all round recruit. Her prize was awarded by the Nursing Mirror. Another member of this first training cadre with previous service was Private V. Joyce. There were 750 applications. They would complete three months training at the Depot, then four months training to nursing orderly class three, then twelve months later reach grade two and then after their four year engagement be able to pass the State Registered Nurse examination (cited from Soldier Magazine November 1950)

The January 1951 edition of the AMS Magazine featured Private Catherall, the first private soldier of the QARANC. Pte Catherall was posted to QAMH Millbank and there is a photo of Pte Catherall standing by the main officers entrance. The article cites her year and place of birth as 1932 in Liverpool. Her mother was a nurse at the Western Hospital in Liverpool.

Members of The Queen Alexandra's Royal Army Nursing Corps can apply for a nursing commission to give them officer status at any time in their career. See the officer rank structure page.


The Soldier Magazine of March 1953 featured the first 15 non-commissioned officers to be posted to Hong Kong from the Corps Depot in Hindhead. It pictured their new khaki service dress, No 1 uniform with grey and scarlet facings and their light-weight tropical dress and grey ward dress with white caps, which they referred to as Sister Dora type. These 15 NCOs were to replace members of the Royal Army Medical Corps on the hospital wards whilst undertaking their SRN training. The article interviewed a Sister who described how they would learn about tropical diseases and gunshot wounds. It went on to say that the highest NCO rank was Staff-Serjeant but that a Warrant Officers’ course would soon start and result in the first Corps Regimental Serjeant Major.


The first junior ranks QA NCOs to apply for a commission was in 1954. These were three Non Commissioned Officers who had passed their State Registered Nurse (SRN) examination (cited in the book Queen Alexandra's Royal Army Nursing Corps (Famous Regts. S)

The Soldier Magazine of March 1957 has a photo and information about the QARANC first Warrant Officer Jean Deakin. She served as chief clerk to the Assistant Director Medical Services in Germany. She replaced a WOI of the RAMC. Her army career started four and a half years previously as a nursing orderly. 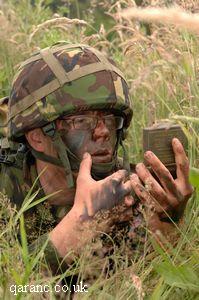 UK Army establishment figures for the Queen Alexandra's Royal Army Nursing Corps (trained personnel) for 2004 was at a strength of 805. This figure represents Other Ranks (OR). This figure does not include full time reserve services or mobilised reservists. The 2012 army ranks figures for all regular personnel was 1095.

Officer figures are on the Officer ranks page.