One of the nice things about serving in the Queen Alexandra's Royal Army Nursing Corps is that many friends are made. Friendships are formed within the QARANC and with soldiers from many regiments and corps. Often such friends are posted and it is all too easy to lose contact, or misplace addresses or e-mails. There are many ways to get back in touch with former QA's and members of the armed forces. This find army friends and how to find military records page also has information about tracing the history and service records of deceased relatives who served in the army or worked as a nurse in the National Health Service (NHS).

Forces War Records are a military genealogy site where you can find military records of over 6 million British Armed Forces personnel cross matched with over 4000 Regiments, Bases and Ships of the British Armed Forces. This includes members of the Queen Alexandra's Imperial Military Nursing Service and the Queen Alexandra's Royal Army Nursing Corps. They are offering users of this site a 40% off membership offer for visitors who use the discount code AF40 if they decide to become a member after using their free searches. Of particular benefit has been their WW1 Soldiers Medical Records section.

For those looking to find military friends, for information on a former nurse of the QAIMNS, QARANC, Royal Red Cross, VAD and other nursing organisations please try Genes Reunited where you can search for ancestors from military records, census, birth, marriages and death certificates as well as over 673 million family trees. At GenesReunited it is free to build your family tree online and is one of the quickest and easiest ways to discover your family history and accessing army service records.

Enjoy premium access to Genes Reunited for half of the normal price with the discount code PLAT50 which expires on the 17th February. More Information.

Another genealogy website which gives you access to military records and allows you to build a family tree is Find My Past. 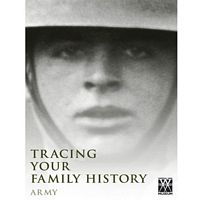 from the Imperial War Museum which guides the beginner in tracing relatives involvement in twentieth century warfare. Tracing Your Family History Army includes details on where to find service and casualty records; an explanation of the military structure and rank as well as explanations of the resources available from the Imperial War Museum. There is also a useful addresses section and a select bibliography where further help and information can be obtained.

Living DNA Genealogy offer - Living DNA is a personal DNA service, designed to help people understand more about themselves and where they came from by breaking down your ancestry across the British Isles and 80 worldwide regions. You simply order a test, activate it online and then return mouth swabs. Get 10% off with the voucher code XMAS16 More information. 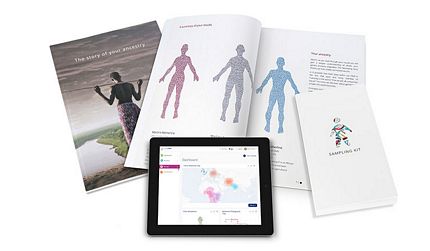 The Commonwealth Graves Commission website at www.cwgc.org.uk holds the service records of soldiers and QAs killed in action. Their address is:

The National Archives in Kew (used to be called Public Record Office) holds each army service record of soldiers and QAIMNS personnel who survived their World War One service and those who served in the forces before 1921. Some records may not be complete due to London bombing raids of the Second World War. The National Archives website is www.nationalarchives.gov.uk and the address is:

For example British Army nurses service records for the Great War 1914 to 1918 are retained by the National Archives as are some prior and after these dates. This page details what type of information they keep, such as confidential reports and what units they served in. There is a sample record to view online. With thanks to Terry Hissey. 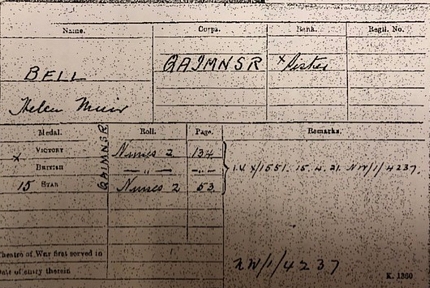 Example of a War Office record for a QAIMNSR nurse.

Soldiers, QAIMNS and QARANC personnel who served after the year 1921 records are stored at the Army Personnel Centre. Their contact details are at:

Information needed to make searching for the military records of a deceased relative include, surname, Christian name, rank held on discharge, service number, regiment or corps, date of birth and year of discharge from the Army, Navy or RAF with reason for leaving, ie demobilisation, completion of regular engagement, medical discharge or end of National Service. Any details known of disability pension, wounds, injury or illnesses from army service should be included in the request for service details of an ex-serviceman/woman search document.

There is a small charge for the information and in 2008 this was £30. Qaranc.co.uk do not think there is a charge for widows and widowers. Payment details are included in the pack. Please do not send any money until requested by the Historical Disclosures Section. They will also need proof of death of the serviceman or woman such as a copy of their death certificate, obituary notice or funeral certificate. These should be copies since documentation may not be returned. This is needed to comply with the Data Protection Act 1998.

It can take up to four months for information to be sent back to the applicant. Welfare enquires are given priority over family interest enquires. Records may not include specific theatres of operation or action seen but could include medals and awards though not citations. Few records contain photographs.

The Army Personnel Centre advise relatives who have completed their search to also approach the respective Regimental or Corps museums which may store war diaries. Details can be found at www.armymuseums.org.uk Many have teams of researchers who can help with information and photos of specific time periods and locations.

As an example of information that can be obtained please read the George Main - Gordon Highlanders WW2 page.

VAD Records for those who served in the Voluntary Aid Detachment can be found online at https://vad.redcross.org.uk/en

Those seeking information about their Military medical records should contact :

When applying for medals of your own, a deceased relative or replacement medals further information can be obtained from:


There are several websites where soldiers and ex-soldiers can register for free in order to contact or be contacted by former comrades. After registering you can post a biography or profile for others to read such as where you now live, hobbies, interests, other postings, promotions, medals, family news, etc. If someone reads about you during a military search and remembers you then they can get in touch. Some of these sites may charge a small fee if you want to send messages to other members.

Other services from such websites include arranging reunions, sharing memories, remembrance, being able to upload photos, chat rooms and message boards.

The websites that I am aware of are:


Scarlet Finders is run by an ex QA who specialises in tracing information about military and civilian nurses who nursed during the late nineteenth or early twentieth century. This information includes details of their military service record and includes nursing service and how he or she lived and worked.
Scarlet Finders have helped people learn about a family member who has served in:
The research report undertaken by Scarlet Finders can be read in the example page. Such information is obtained through databases, consensus, records held at the Imperial War Museum, National Archives, records from the Army Medical Services Museum and other resources that Scarlet Finders can expertly tap into to gain important information that will help families learn more about a descendant.

Historical information can be obtained for nurses who served in the First and Second World Wars and even as far back as the Boer War.

There is a small charge for the research report, but this is worth paying to get expert research help from a team that will be able to accurately source material that could be time consuming for someone who does not know their way around researching records or getting permission to access records and files. In addition you get the benefit of help from someone who has served in the army and worked as a nurse.

This is of particular benefit to someone looking for information about a dead relative such as a grandmother or tracing a family tree but may not have the time to do extensive research or know where to start looking.

Scarlet Finders is also pleased to look at photographs and give advise or give a preliminary assessment from the written information you give them. For more information visit www.scarletfinders.co.uk


Military Genealogy Forces Reunited is the only site where you can find military records of over 2 million British Armed Forces personnel exclusively cross matched with over 4000 Regiments, Bases and Ships of the British Armed Forces going back to before 1630, making your genealogy task much easier and more complete.


Who Remembers Me is a free to search site that helps you to find old friends and colleagues using their easy to use and fast search tool which just needs the person's first name and surname. Search for friends in the separate section for the Army, or use the sections for school friends, colleges, universities, workplaces, places of worship, sports teams, neighbours and pubs.

Uniform Dating is a Worldwide dating site for people whose work means wearing a uniform. This means you can meet firefighters, police officers, military personnel, prison officers etc. Uniform Dating is an ideal site for QA's looking for friendship, love or romance. It is also an ideal dating and friend website for those looking for members of the QARANC. Visit the Uniform Dating website at www.uniformdating.com