The photograph below depicts the Hospital Blues Uniform that was worn by patients in Military or Convalescence Hospitals during World War One. A History of this convalescence suit follows. 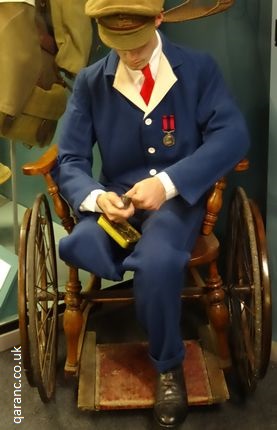 The Hospital Blues uniform was worn by those patients who could get out of bed. They were a flannel type material of Oxford blue hue with a single breasted suit and trousers. Each had a white lining. The tie would have been red and the shirt white. Regimental caps were worn and medals were displayed on the left breast. Those with missing limbs would have had their arms and trouser legs of the missing limbs carefully folded up and pinned back. Those lucky enough to still have feet, wore either both boots, highly polished or just a sad lonely one.

The Hospital Blues uniform were also known as the blue invalid uniform, convalescent blues or hospital undress. Sizing could be hit or miss and this is why in some photographs the inner linings can be seen. Examples of historical photos of army patients can be seen on the Colchester Military Hospital page. The above photograph was taken at the Museum of Military Medicine. 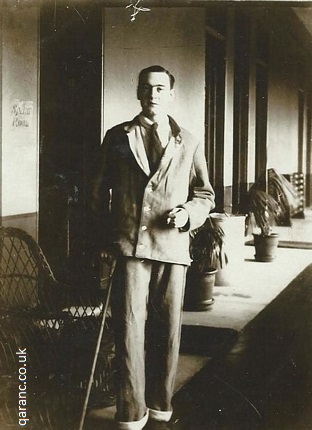 Most, in time, became ill fitting, since on washing, the flannel would shrink whilst the lining did not, giving a comical appearance that was lampooned by many a popular penny picture postcard artist.

They were first issued during the Crimean War after the general public were appalled by dispatches by William Howard Russell. These revealed the true suffering of the wounded. As a result Queen Victoria got actively involved and then the special blue uniforms were issued. It also resulted in one of the largest military hospitals being built at Netley, Southampton. Some of the garments were still in existence up to QA World War Two and even the Korean War .

They had no pockets, which upset many men, since they could not keep items like tobacco tins easily on their person.