Details of military events in the UK such as talks and debates::

If you run Military Events and would like free listing on this page then please contact Qaranc.co.uk 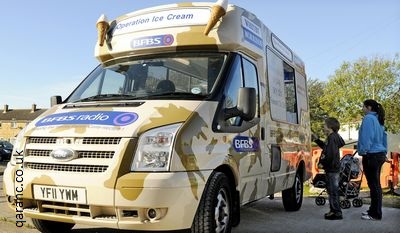 BFBS’s Chris Pratt, now known as OC Ice-Cream Ops, wants to hear from Unit Welfare Officers who would like a visit from the morale-on-wheels machine. Chris said:

If you’re having a families day or just want to get us along to dispense some cheer and maybe record a few dedications and messages, just give me a call. Our first priority will be families of those deployed on Operations, but we’ll consider any requests!Contact him on 07803 590580 or Chris.Pratt@bfbs.com.

We are delighted to team up with BFBS to support the families of our servicemen and women deployed on operations. We can’t get an ice-cream van into Afghanistan to cool down the boys and girls out there, but at least we can raise a smile with their families back home.

Since BFBS’s Op Ice-Cream van was first launched in August 2010, it has travelled over 27,000 miles visiting hundreds of military bases across the UK, and handed out over twenty-two thousand free ice-cream cones.

BFBS is available on DAB Digital Radio in the UK, on FM across the Forces world, on Sky Guide 0211, Freesat Channel 786, www.bfbs.com and via the BFBS smartphone app. If you have family, friends or loved ones currently based overseas with the Forces, then remember you can send a message of support online at www.bfbs.com/messages

. Her nephew is giving talks about her experiences with extracts read out from her diary. These talks take place throughout the UK and includes the Imperial War Museum, the National Army Museum, the Florence Nightingale Museum and at local schools and community halls. Details of the next event can be found at
www.edithappleton.org.uk/Talks/confirmed_dates.asp.

Hunterian Museum at the Royal College of Surgeons special event:

Helping the Wounded: Disability and the Military 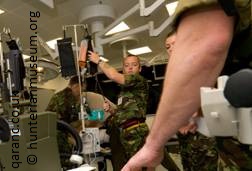 The Defence Medical Services and National Health Service wards are treating more injured servicemen and women who will require long-term treatment and assistance during their recovery and adaption to new life-styles.

Newspapers highlight stories of the issues faced by the wounded - and this free talk will discuss the nature of modern war injuries, the recovery processes for those wounded and injured on operational duty and what the future holds for the new generation of disabled ex-servicemen and women.

Speakers include Colonel David Richmond, the most senior serviceman to be wounded in Afghanistan to date, Army orthopaedic surgeon Major Arul Ramasamy and former Royal Navy Captain Stevan Jackson of The Royal British Legion which supports the recovery of the wounded and provides welfare support to veterans. They will talk about their experiences and answer questions. The discussion will be chaired by Richard Hollingham, the BBC Science correspondent.

To book a place on this free military event at the Hunterian Museum, London, on Thursday 1 December 2011 at 7pm please call 020 7869 6560 or visit www.hunterianmuseum.org for more information.