On 8 May 1945, the Nazi's surrendered and the Allies celebrated Victory in Europe which brought to an end six years of devastation and uncertainty. Since then, VE Day has been commemorated. 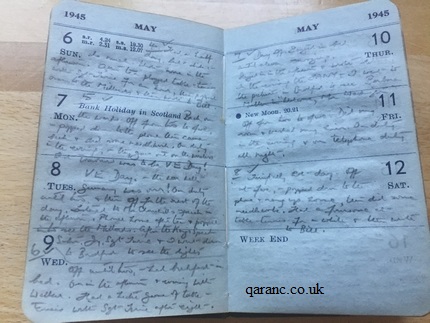 At 3pm Prime Minister Winston Churchill made an historic radio announcement that the World War in Europe had ended following Germany's surrender the day before. Nurses around Britain heard the wireless broadcast, and this included VAD Joan Holstius who marked the entry in her war diary with:

VE Day, the war with Germany was over! On duty until two and then off for the rest of the day. Listened to Mr C.'s speech in the afternoon. Phoned home after tea and then popped into see the Millards.
After the King's speech, Sister, Joy, Sgt. June and I went down to Bradford (on Avon) to see the lights.

More of Joan's documentations and photos can be seen on:

Regimental Route and Movement Order from No. 20 Coy RAMC.

Read about the Voluntary Aid Detachment.