Photographs, memories and information about the 31st BGH that was at Jaeger Barracks in Lendorf just outside Klagenfurt in Austria 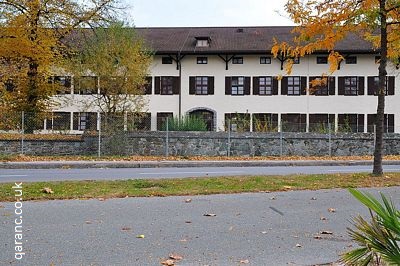 After the Second World War there was a British Military Hospital at Lendorf within the Jaeger Barracks in Austria. This was the 31st British General Hospital. It was handed over in 1955 as part of the Austrian Peace treaty.

These photos have been kindly provided by John Leggett who was there as a child. 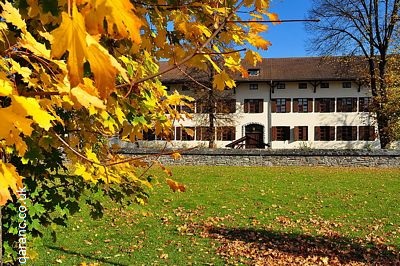 I lived in quarters there as an army "brat" in 1954/55 shortly before the occupation forces left Austria. I'm not sure if it was a fully fledged BMH but it may have been designated 31 (British) General Hospital and was in Jaeger Barracks, Lendorf just outside Klagenfurt. I believe the barracks still stands today. The site is still there and viewable on Google Earth or Maps. The one with the old field ambulance was taken somewhere between Klagenfurt and Vienna and is my mother, sisters and I returning from collecting Mum from Klagenfurt around 1953 or 1954. 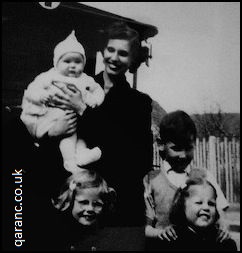 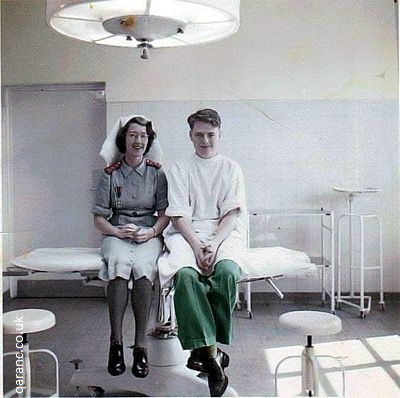 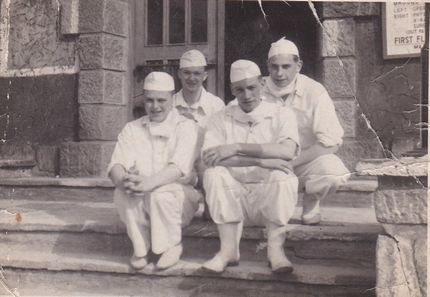 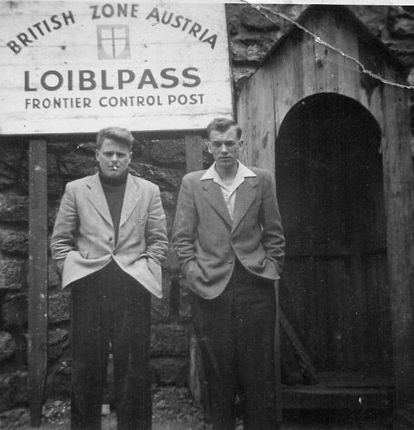 Fun at the swimming pool with Colonel Watts going in the brink: 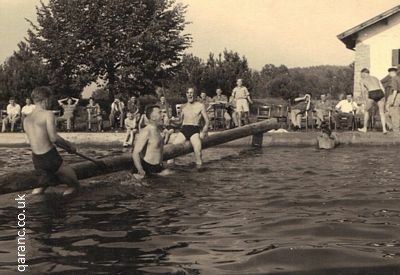 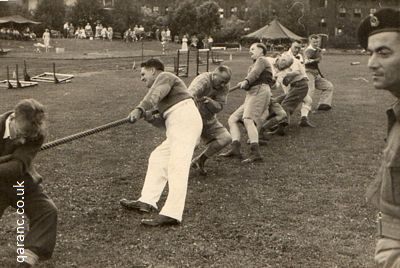 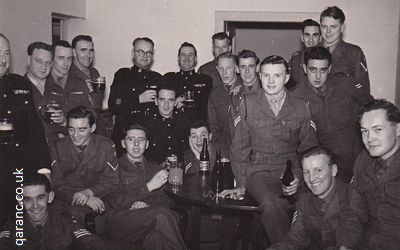 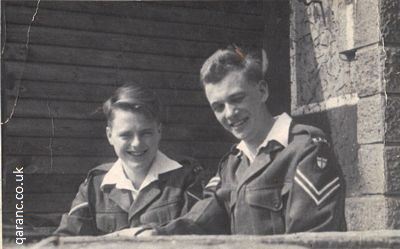 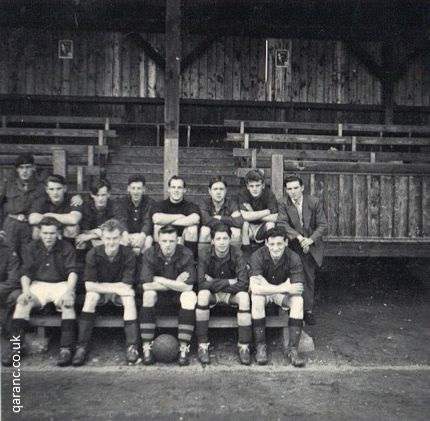 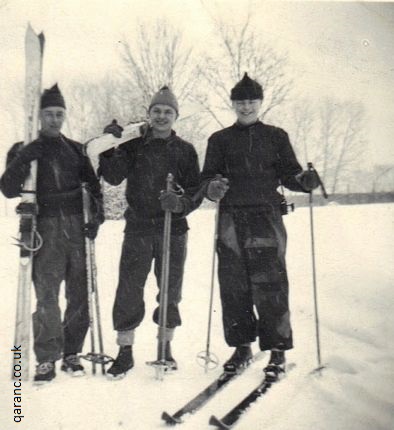 
A Google map of the buildings which are used by the Austrian Army: 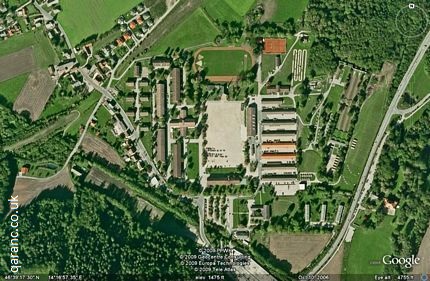 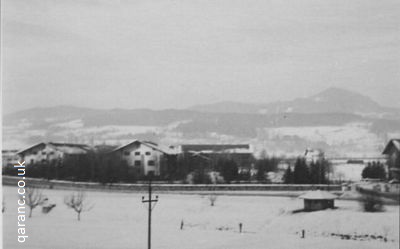 How I came to the Klagenfurt lab is a tale that may be worth telling. At school (Parmiter's Grammar School, Bethnal Green, East London) I had an undistinguished record but developed an ambition to study Zoology. This led me to focus on biology homework and to do this task in the local Public Reference Library. It also led me to leave school in 1950 after one year in the sixth form so as to continue on a workable path to university studies by doing the part-time evening Intermediate BSc course at Birkbeck College, working as a laboratory technician by day. There was no deferment of National Service for part-time study so I was due for call-up in 1951.

In the reference library I happened to find a glossy pamphlet published by the Royal Army Medical Corps describing its work and establishments and, at just the right moment, was able to identify my preferred posting when my time would come: the lowest grade of lab tech because that's all that was open to NS men, at BMH Klagenfurt. Alternatives would have included the Far East, etc.

At my Medical/enrollment (at Wanstead, I seem to remember, about April) there was a form to complete in which there were two questions about role: 1. Can you cook? and 2. Do you have any preferred Army posting? I denied cookery skills and, without much hope, gave all the details I could of the rank, grade, and posting I hoped for. Amazingly, come the end of basic training in December, my posting was exactly what I had asked for, whereas most of my draft were sent to the Far East and many ended up in the Korean War. Although I hated the regimentals (but enjoyed parade drill) my army service was a very positive experience with the opportunity to take responsibility for real functions in the lab and on the wards, ones that made a difference to the treatment of the patients. 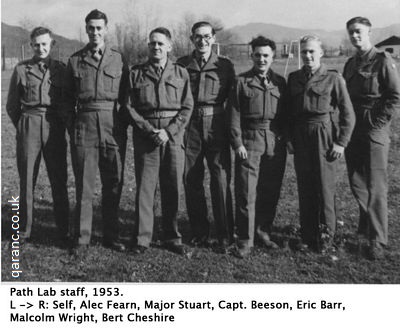 I kept up with Brian Beeson after our Nat Service, both during my student days in London and years later when married and with a young family our holidays would take us from Scotland to France, sometimes staying a night or two with his family at Caton, nr Lancaster. Beeson served as Home Office Pathologist for a swathe of the country including Preston, Lancaster, dealing with murders etc. Sadly, he developed a heart murmur, but given his ebullient nature did not allow this to stop his hectic lifestyle, leading to an early death. I suppose that today he would be fitted with a device to restart the heart and might go on until old age. 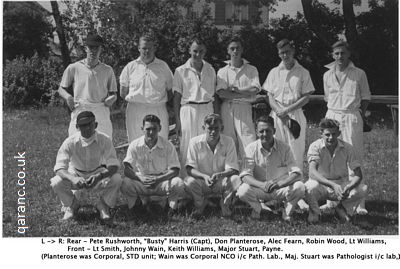 
Fearn also appears in the cricket team photo. I believe that he either attended coaching with or even tried out for Surrey at the Oval. I don't know where he worked as a lab tech and likewise know nothing about the others shown.

My understanding about the origin of the barracks was that it had originally belonged to the SS, there being no separate Austrian army as far as I know. 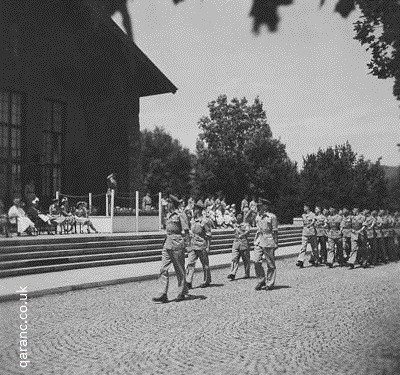 Planterose was the STO in my time. That role was one of the few that enabled NS men to be given a stripe so as to boss their patients about! I kept up with him for quite a long time. He took a PhD in virology and spent some years at an American research lab, then was at (probably) the Animal Viruses lab, Pirbright, where he was associated with Fred Brown a prominent virologist noted for studies of Foot & Mouth etc. Planterose died early -- a fate that has affected several virologists of my acquaintance.

Wain was an NCO because he had signed on for the minimum time rather than just do National Service. He was an effective manager in the lab. 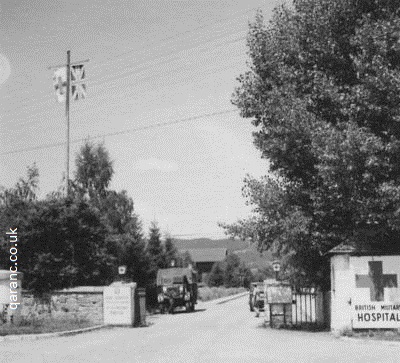 The camp gate: The board on the left shows that it was also the local RMP HQ. 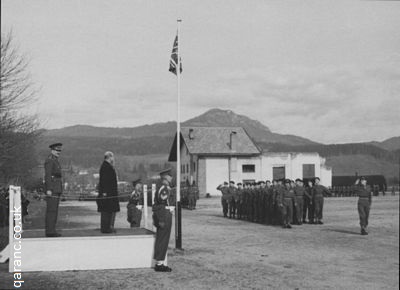 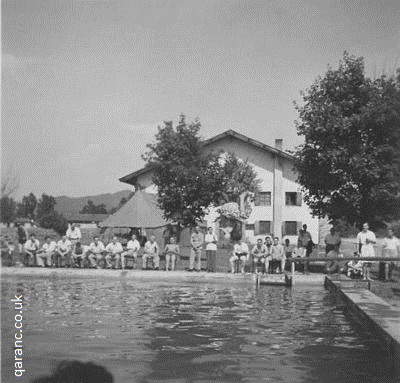 Another image of the swimming pool shows some young women were involved. Presumably they were some of our QARANCs. 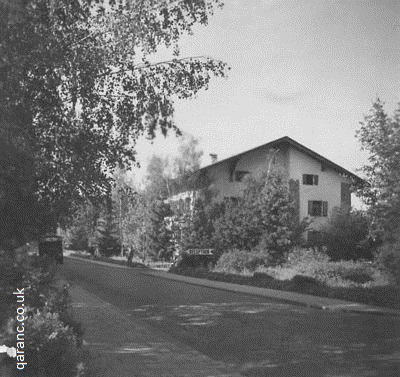 Reception: The path lab occupied two floors (Ground & Basement) at the end of the barrack block behind the notice.

I had this published in The Lancet:

SIR,-A paper on flies and diarrhoeal disease in your issue of April 27 (p 993) called to mind an embarrassing episode of my youth. While on national service at the British Military Hospital, Klagenfurt, Austria, I found myself in 1951 to 1953 learning hospital laboratory practice "on the job". The high point of my summer spell of duty as routine bacteriologist was the isolation in pure culture and identification of Salmonella typhi. So impressed was I by this achievement that I kept the petri dish inverted on the bench to show to visitors. We had no refrigerator. At the next Commanding Officer’s inspection, I presented this plate for scrutiny. Fortunately the Colonel was no bacteriologist, or he would have noticed the trail of microcolonies that, in neatly staggered rows of three, meandered across the plate, terminating at a chip in its side-wall. Clearly an insect, probably a housefly, had entered, feasted on the bacteria, and departed, its feet and proboscis well-laden. Fingers were crossed and tenterhooks deployed, but the dreaded outbreak of typhoid never materialised. Nor was I promoted beyond Private! Royal Army Medical Corps.


My first posting was to BMH Klagenfurt in Austria, a truly idyllic site on the outskirts of the town. This hospital had been built for the Austrian Army and was apparently finished just before it was captured by the British 8th Army after it had worked its way through Italy. As the only STO (Special Treatment Orderly) clinic/office was in the Laboratory block, and my Medical Officer was also the pathologist Captain Kellerer, I also worked as an extra pair of hands in the Path lab.

All the blocks included the QARANC mess, officers mess and married families quarters were all situated within the large grounds and were luxurious compared with what I had come from at Netley. When I left in July 1955 after the Austrian Peace treaty was signed in the spring/summer of 1955 I was posted to BMH Hamburg, but due to the withdrawal of many troops from that area of BAOR, the decision was taken to close the clinic when I had been there only a month and transfer the workload and me to BMH Hannover where I spent the next 12 months.

I also noted on Google maps that the buildings are still all there in the Lendorf district of the town as well as the buildings which were the RASC depot next door, even down to the married quarter houses. The only thing missing which was there was the open air swimming pool. I said previously that facilities were above average. It was better than a holiday camp and the weather in the spring and summer of 1955 was extremely warm so I spent many happy hours after work in and around the pool. Dennis Read

So pleased to find the building/hospital I was born in 1946. After a highly decorated war effort my Father had been posted to Klagenfurt and my mother went to join him as she was expecting me (her first child). My original birth certificate is of course a Military one, and I have been told the Hospital was indeed an SS one, the Maternity unit used in particular for the birth of Lebensborn babies (Hitlers master race plan). The town had many orphanages run by nuns for the results! I was christened in the Cathedral, before being brought back to England in my carry-cot. The rest of my early life was to be spent traipsing round the world, mainly in the Colonies of Africa. Sheila