The pictures below are from the collection of Margaret McKay McKenzie of the Queen Alexandra's Imperial Military Nursing Service Reserve whose autograph book is full of sketches and cartoons by the soldiers she cared for whilst nursing in a variety of locations including Malta, Salonica, Sorovitch with the 33rd Stationary Hospital, onboard hospital ships and Beaufort War Hospital. This was a common hobby amongst patients and nurses of the Great War. 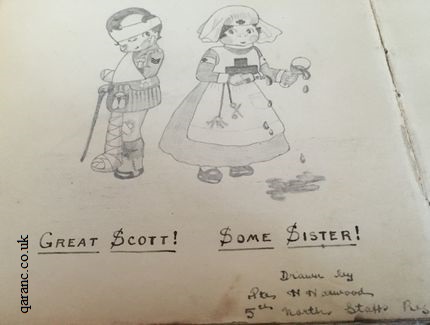 Below the sketches of the soldier and nurse is written: 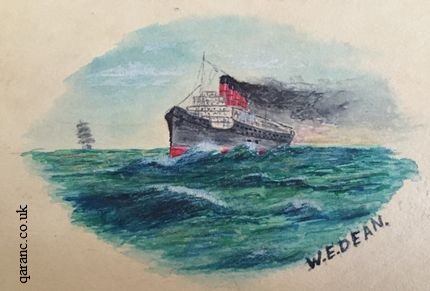 This wonderful sketch of a Hospital Ship has been signed by the illustrator W.E. Dean. (See further below for biography) 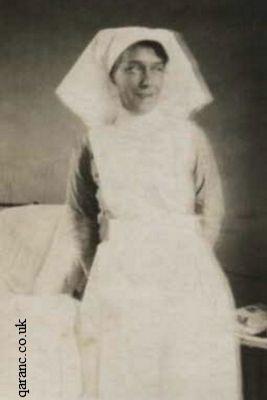 Though Margaret had a sister who was also a nurse, we are confident that this is Margaret in her QA working dress. 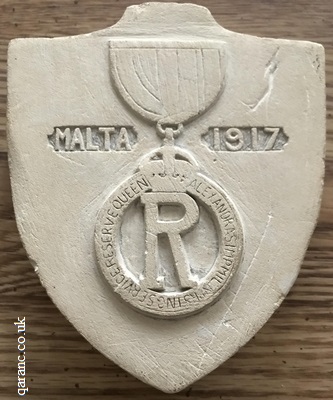 This beautiful limestone carving is thought to have been made for Margaret McKay McKenzie when she was assigned to Malta IN 1917 during WWI.


This sweet entry demonstrates the esteem that her patients held for her: 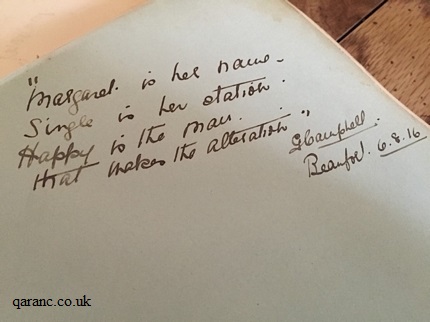 Margaret is her name
Single is her station.
Happy is the man
that makes the alteration.


Other pages from within the book include:

Drawing of a WWI Nurse Holding a Spoon


Other pages of interest:

Fiona Mitford, Ex-WO2, QARANC(V) of Heirs 2 U Research, kindly provided the following about Margaret and two of the contributors to her autograph book:

By 1881 the family were living at 11 Yorkhill Street, Anderston, Glasgow, her father away working aboard a Ship travelling to South America.

On the 1901 census, Maggie was working as a Table Maid (Domestic), living as a visitor in the household of Angus McPhee an HMC Prison Warden at Peterhead Jail, Scotland.

Within the next decade, she had undertook nurse training, as the 1911 census shows, she was a hospital Nurse at the Reformatory School, Reigate, Surrey.

She enlisted into the QAIMNS Reserve, and worked in Malta, Salonica and onboard hospital ships, until serving in the 33rd Stationary Hospital providing six-hundred beds, stationed at Sorovich, Serbia, (now Amyntaion, Greece). RAMC reports at the time specified that the Salonika front “had three casualties of disease to every one casualty of enemy action,” with Malaria predominantly the most serious affliction of the British forces in the area. By the end of the war Maggie was working at Beaufort War Hospital, in Bristol.

With little to tie her to the UK after the Great War, Maggie followed her sister to America, and worked at the local Hospital in Utica, Oneida. Dolina, another younger sister, joined them, and also found employment at the hospital.

Sadly, Maggie died from pneumonia on 13 Oct 1925 in the hospital where she had worked, and Dolina died there just six years later. Gina outlived Dolina by twenty-one years, as Keeper of a successful Utica restaurant, and raising her daughter in Oneida.

Their brother William died before 1925, possibly as a soldier in the Great War, but not proved yet. Isa, their youngest sister, and their oldest surviving brother, Alexander, remained in Scotland until their deaths.

Maggie owed her middle name to her paternal grandmother, Margaret McKay (1816-1901), who was born in Strathpeffer, Ross-shire, and married her grandfather Huntley McKenzie, a Shoemaker, on 23 August 1841 in Inverness.

Harry was a Cotton Weaver in 1901, living in the family home at 41 Westmorland Street, Skipton. He married fellow native of Skipton, Emily Darnwood (1886-1946), in the summer of 1910, and by 1911, they were living at 17 Keighley Road, Skipton, with his occupation again given as Cotton Weaver. No children appear to have been forthcoming.

He joined the Royal Engineers as 2/Cpl, 157494, later in the Waterways and Railways, as Corporal, RE, army number WR/255166. He was awarded the Victory and British medals, indicating he did not enter an overseas posting until 1916 or later.

In Maggie McKenzie’s autograph book he identified himself as serving as a private with the 5th Battalion, North Staffordshire Regiment. The 5th Battalion saw action in Wulverghem near Ypres in April 1915, Hooge and Hohenzollern Redoubt in October 1915, and the following month were ordered to Egypt, but returned to France in late January 1916. They next saw action on 1 July 1916 at Gommecourt, and the following year took part in Operations at Ancre, Gommecourt, Rettemoy Graben, Germany’s retreat to the Hindeburg Line, Lievin and Hill 70. In 1918 the North Staffs were active in the Battles of St Quentin, Beaurevoir, Cambria, Selle and Sambre.

In Maggie MCKenzie’s autograph book he signed his illustration as W. E. Dean, and he took a considerable effort to find, utilising various search engines, he was eventually found to be the above named man who was a celebrated Royal Crown Derby artist, and painted chinaware, whilst mastering his superior skills marine and seascape watercolours, that appear to have been his passion.

The most likely William E Dean joined the Bedfordshire Regiment as a Private, and was promoted to Corporal while there, regimental number: 12533. He transferred to the Nottingham & Derbyshire (Sherwood Foresters) Regiment as Serjeant 103451, having entered France on 30 July 1915.

Possessing such extraordinary artistic skills, he was likely utilised by the Army in some form of drawing or sketching capacity.

If he was this man, then he was awarded the Military Medal whilst serving with the 2nd Battalion, Sherwood Foresters; he would also have received the 1915 Star, British War Medal and Victory Medal.

A Google search turns up numerous hits, however he is often mis-recorded as ‘William Edward;’ his birth was registered as William Edwin, the 1911 census clearly states the same, as does an entry in the National Probate Register. He was likely given his middle-names after Edwin, one of his paternal uncles, and James after his father. Some of his marine scenes are recorded dated in the late 1890’s, so he continued with Royal Crown Derby, probably until after 1939.

On 9 September 1939 they were recorded in the England & Wales Register at 20 Sherwood Street, Derby, William’s occupation given as a China Painter.

Catherine predeceased him, and William continued living at Sherwood Street, until he was admitted to the Derbyshire Royal Infirmary, London Road, where he died on 6 January 1947, in his home town.