This funny nurse cartoon is from the collection of Mary Hannah Lonsdale who served in World War Two. Mary saw service in Malta, Sicily and Palestine. We love the many details in the picture such as the chamber pot under the bed and the man in the window frame trying to reach the underwear with a hook. 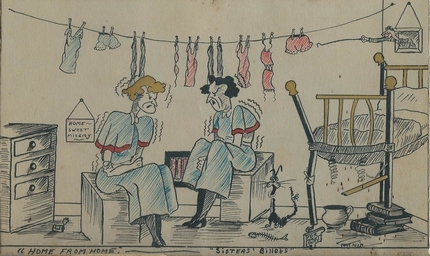 Under this nurse cartoon of two QARANC nursing sisters huddling in the cold in front of a fire is written Home From Home and Sisters Billets.

There is a signature which we think says Torluin.

Other pages of interest with some Second World War cartoons include: