Copy of the Mentioned in a Despatch official letter from the Secretary of State for War after the Great War. Includes a copy of the signature of Sir Winston Churchill: 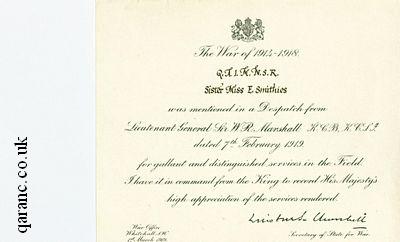 The photo above is a copy of the mentioned in despatched of QAIMNS (R) nursing sister Miss Ethel Smithies who was awarded the RRC. Read more about her, see her photograph and learn why she was awarded her honour on the Royal Red Cross page.

The example of the mentioned in Despatches Letter From The Secretary of State for War From World War One reads:


The War of 1914 - 1918
Q.A.I.M.N.S.R.
Sister Miss E, Smithies
was mentioned in a Despatch from
Lieutenant General Sir W.R. Marshall K.C.B
dated 7th February 1919
for gallant and distinguished services in the Field.
I have it in command from the King to record His Majesty's
high appreciation of the services rendered.
Churchill
Secretary of State for War
War Office
Whitehall
1st March 1919


The signature is that of Sir Winston Churchill who was the Secretary of State for War from 10 January 1919 to 13 February 1921.

describes it as an official report written by a senior officer and sent to High Command where gallant or meritorious service has been performed. Recipients would wear a bronze oak leaf attached to their medal ribbon and it was announced in the London Gazette. Sister Luard was Mentioned in Despatches twice.


An example of Mentioned in Despatches WW2 can be found in Millions Like Us: Women's Lives in War and Peace 1939-1949

) which was honoured to Sister Lorna Bradey of the QAIMNS for distinguished service. It reads:

By the King’s Order the name of Sister Miss L E Bradey, Queen Alexandra’s Imperial Military Nursing Service, was published in the London Gazette on 19 July, 1945, as mentioned in a Despatch for distinguished service. I am charges to record His Majesty’s high appreciation. Secretary of State for War P J Gripp.