Photographs and history of the QA Officer Medal including the QARANC and QAIMNS medals :

Queen Alexandra wanted each of her nurses to have a special badge and ribbon that would identify them as her QA nurses. Though the QA's were formed in 1902 (as the QAIMNS) it was not until 1905 that a ribbon and medal badge were finally decided. This was because her original design choice looked like the Royal Victorian Order. Despite this her original designs were honoured and each QA Officer was awarded the QA badge and ribbon which is still worn by QA Officers to this day on their red capes. The QA badge incorporates the Order of the Dannebrog, the ancient Danish order of Chivalry. The ribbon is of the new QA colours white, red and blue which are also now used for the Corps belt and Tactical Recognition Flash.

Each QA Sister received her QA Medal personally from Queen Alexandra in a special ceremony.

When the QAIMNS became the QARANC the ribbon remained the same colour and the shape of the medal and badge remained the same with the cross in the middle surrounded by the words Queen Alexandra's Royal Army Nursing Corps. 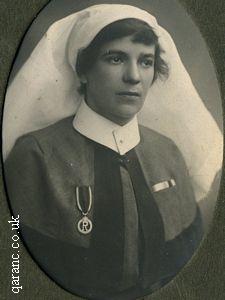 Pictured to the left is the QAIMNSR Medal (Queen Alexandra's Imperial Military Nursing Service Reserves Medal) which is characteristic of the large R in the centre. The photo is of Sister Cole who served in the QAIMNS(R) from 1914 to 1919 and was taken prior to her demobilisation. Read more about her service in the QAIMNS First World War page.


A closer photo of the Queen Alexandra's Imperial Nursing Service Reserve medal has been kindly sent by the relatives of Nursing Sister Holdgate. Read more about her service in Egypt during World War One on the British Military Hospital Egypt BMH Alexandria page. 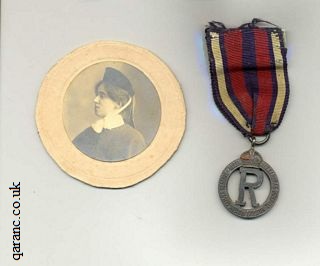 There is another example on the Autograph Book World War One page.


If you would like to contribute any info or photographs of the QA Officer Medal then please contact me.


Some QA Officers medals are often available to buy at auction sites like Ebay or at specialist sellers such as the Sally Bosleys Badge Shop at www.sallysbadges.com