In October 2014 personnel of 22 Field Hospital were deployed to Sierra Leone to help care for healthcare workers at risk of infection from the Ebola virus and patients of this West African country. 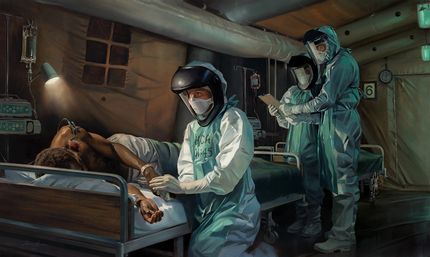 The painting above, commissioned by the QARANC Association, is What Matters Most by war artist Stuart Brown. It depicts the difficult working conditions experienced by the army medics and nurses of OP Gritrock wearing their personal protective equipment. Prints are available from skipperpress.com

These Queen Alexandra's Royal Army Nursing Corps and Royal Army Medical Corps nurses, healthcare assistants, doctors and combat medical technicians of Operation Gritrock were supported by the RFA Argus and a large team of logistical personnel such as chefs and drivers.

A ninety-two bed facility was established at Kerry Town, on the Freetown Peninsula, with twelve beds for the care of healthcare staff.

The facility was handed over to Save The Children in 2015.

The Colonel in Chief of the QARANC, Her Royal Highness The Countess of Wessex, unveiled the painting, What Matters Most on Friday 18 November 2016 during the Chief Nursing Officer's Study Day.

A second painting, The Ebola Survivor Dance, funded by the RAMC Association, is to be released in 2017.