Korean War and the QARANC


Information and history of the Korean War and the involvement of the QARANC: 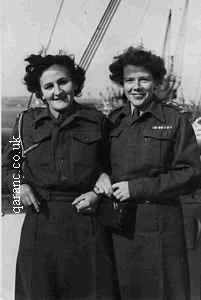 On the 2 September 1945 The Japanese Army surrendered to the Allied Forces aboard the US battleship Missouri. As part of the surrender treaty Japan lost control of Korea which it had governed since 1910. North Korea was given over to the Communists which was ruled by Communist Russia whilst South Korea was ruled by a Democratic Government with the protection of the United States of America. The dividing line between North and South was known as the 38th parallel.

America withdrew from Korea in 1948 as did the Soviet troops in the same year when the Republic of Korea (ROK) was formed. However the Russian army continued to support the North with weapons.

On the 25 June 1950 Northern Korea, backed by Russia attacked Southern Korea with an artillery bombardment before invading the capital of Seoul and the ports with Russian T-34 tanks. The reason that they invaded was to reunify the country. 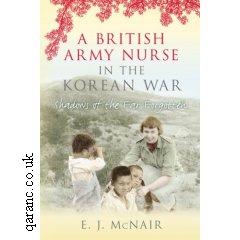 
An emergency meeting of the United Nations Security Council requested that North Korea withdraw back to the 38th Parallel when they condemned their actions. When they did not after 24 hours the UN requested their members to support the Republic of Korea and created a Unified Command.

America sent their troops to defend the region and requested the United Nations (UN) to send additional peace keeping troops. General MacArthur was the commander in chief of the United Nations Command. Twenty two nations were authorized to send troops to help maintain a democratic South Korea. This included two brigades of the British Army and members of the newly formed Queen Alexandra's Royal Army Nursing Corps (QARANC). The QAs had become a Corps the year before and had proved their battle worth in World War I and II as the Queen Alexandra's Imperial Military Nursing Service (QAIMNS) . They once again proved their ability to nurse in war as well as peacekeeping. 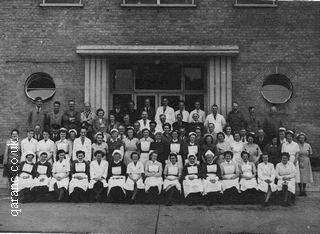 Britain sent 40,000 soldiers in July 1950 which included regular soldiers, national servicemen and former soldiers who had served in World War Two and were now on the Z list. They sailed from the UK to the South Korean port of Pusan which was being defended by the USA. The hospital ship Maine II of the Royal Navy Far Eastern Fleet was also mobilised. It was at the time on exercise with the US so was easily mobilised. QAs served aboard HS Maine II alongside Royal Navy nurses of the Alexandra's Royal Naval Nursing Service (QARNNS). The first British naval forces arrived in Korean waters on the 29 June 1950.

The first British Regiments to enter the Korean War were the Argyll and Southern Highlanders and the Middlesex Regiment. Most were national servicemen and were given battle training at Norfolk at the North Larkhill Foot Plains.

Most of the casualties were American troops who were evacuated to Japan to the British Commonwealth General Hospital (BCGH) at Kure aboard the HMHS Maine II, which made many return trips.

The British soldiers suffered from the harsh Korean winter which saw temperatures drop down to minus 25 Celsius. Frostbite was a major danger and infantrymen were only permitted to stand to on guard duty for no more than two hours. Weapons such as the sten gun would freeze. 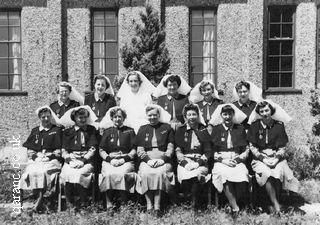 As the war progressed and the UN invaded North Korea to prevent the Communists reforming and invading again the American hospital ships Consolation, Haven and Respose arrived and this allowed HS Maine to sail for Hong Kong with patients suffering from Burns.

These extra hospital ships were to be badly needed because as the UN pushed into the North they did not realise that the Chinese Peoples Volunteer Army had secretly entered the North by crossing the Yalu River. These Chinese troops attacked the American 8th US Cavalry Regiment killing and severely wounded them. This was the first of many attacks on UN troops and casualties and deaths remained high, especially when the Chinese brought in their MIG aircraft. The UN retreated South.

In the post Second World War years it was feared by many that Korea would become the Third World War. The KoreanWar was the first armed conflict of the Cold War and many politicians considered it a chance to strengthen Britain’s special relationship with the US.

Ferocious fighting continued as the UN forces held the line at the 38th parallel against the North Korean and Chinese Communist forces. On the 10 July 1951 peace talks began at Kaesong and then Panmunjom but this did not herald peace in Korea, the fighting continued as politicians and leaders fought for peace. The Commonwealth Hospital in Seoul was set up in a school and was staffed by four QA nurses and two nurse from the Australian Army Nursing Service (AANS).

In February 1953 General Mark Clark proposed an exchange of sick and wounded prisoners of war (POWs).This was agreed between the Communist Forces and the United Nations on the 28 March 1953 and the first exchange of POWs took place on the 20 April during Operation Little Switch. The exchange of POWs continued until the 3 May 1953 by which time 684 United Nations sick and wounded soldiers had been repatriated. The United Nations Command (UNC) repatriated 1030 Chinese troops, 5194 Korean soldiers and 446 civilian internees. At the end of the Korean War Operation Big Switch saw the repatriation of all captured soldiers. 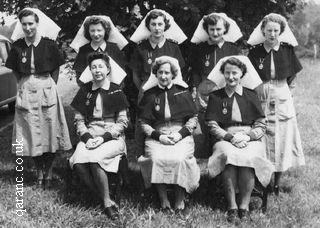 The four photos above are from the collection of QA Sister Mary Jones who served in Korea. She was on a ship called the Windrush. Mary passed away in 2008.

Captain Elizabeth Jilly McNair was a QA sister who helped transfer the wounded UN soldiers from Operation Little Switch onboard an ambulance train. She was assisted in this convoy duty by an Australian female nursing orderly called Private O'Shea. They would transfer patients from BCGH Kure at Kure Station to the RAAF Transit Hospital at Iwakuni after a connection to Hiroshima Station. The Korean War ambulance train was usually a one hospital coach though a second coach could be attached for larger numbers of casualties and convalescent patients. Read more about life aboars the Korean War ambulance train in the book A British Army Nurse In the Korean War

. This includes a diagram of the layout of the ambulance train which usually consisted of a kitchen, office, treatment room, walking wounded compartment with folding chairs, bedded area of 4 up and 4 down beds called litters or bunks, a toilet and a shower.


The demarcation line was set as the battle line rather than the previously established 38th Parallel. Panmumjom became a truce village and a Demilitarised Zone (DMZee) was created.

The stalemate between the politicians and leaders was broken when Josef Stalin died on the 5 March 1953 and North Korea were given an ultimatum from the US that they would use their newly developed hydrogen bomb on military targets. And so on the 23 July 1953 the armistice terms were signed. This was never followed by a peace treaty and both sides still meet to exchange views. This was filmed in 2007 by the BBC as part of the Battlefields documentary series by Peter Snow and his son Dan Snow.

The BBC war archives have an interview with actor Michael Caine in which he talks about the night time raids into no mans land.

The British Commonwealth General Hospital in Kure, also called Brit Com General Hospital or BCGH Kure, was used as a United Nations hospital where the wounded and injured from the Korean War were evacuated. Many arrived by hospital train from Hiroshima.

QA Nurses posted to British Commonwealth General Hospital Kure would sail from a British port via countries like Aden, Calcutta, Singapore and Hong Kong. It generally took three weeks to sail to Japan.


The book A British Army Nurse In the Korean War

written by Captain Jilly McNair of the QARANC describes how two nursing sisters from each Commonwealth force were flown into an area near Seoul to for a British Commonwealth Zone Medical Unit. They were stationed there for two months and conditions were harsh. More Information.

Though the Korean War lasted from 1950 to 1953 many QARANC Sisters and nursing staff were posted to BCGH Kure as late as 1954 to care for British and UN soldiers.


Captain Jilly McNair collected badges and shoulder flashes from various regiments and corps during the Korean War. Read more about this on the QARANC Officer's Cloak page.

In his book A Few Deeds Short of a Hero

Robert Widders recalls a tale he was told by a Korean veteran who was fed up loosing his soap when he went for a wash in the river because the soap that soldiers were sent floated and the current took it away. He took it upon himself to write a cheeky letter to the manufacturers who enjoyed his letter so much that they solved his problem by sending him a tiny anchor and chain to attach to his bar of soap!