Photographs and history of Military Hospital Wheatley near Oxford


The following photographs of Military Hospital Wheatley and its history have been kindly provided by Phil Basford (Maj Retd RAMC): 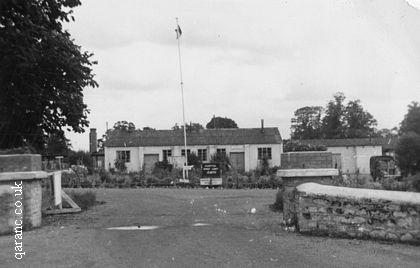 The photo below is Jean Grieve, past Chief Instructor and Commandant of the QA Training Centre from November 1986 until her retirement in June 1988. There is another photo of her on the BMH Benghazi page. 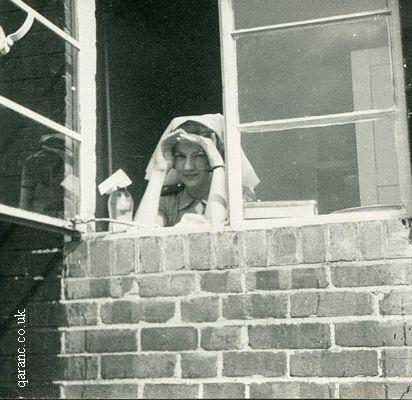 I should explain. Jean, along with another Jean Smith (ex Manchester Royal Neuro), were primarily responsible for me taking up nursing. After basic training (National Service) I was posted to Wheatley to await a course at Alan and Handbury, medical instrument makers as I was to work in medical stores. However, the Suez Crisis occurred and we needed more nursing orderlies on the neuro ward where there were many head and spinal injuries. One morning I was instructed by the RSM to report to Matron in my 'best' uniform which I duly did but only after having a bout of 'intestinal hurry'!! I had seen this lady and her entourage sweeping down the open corridor each morning to her office!! (name of Gara or O'Gara I think). She informed me that I was to work on NS1 which I duly did and had a fantastic time under the 2 ladies mentioned, as well as other sisters. 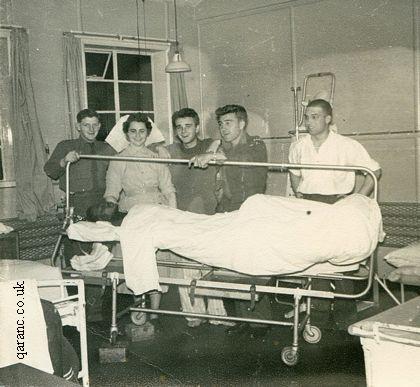 These were the days of Mr Walpole Lewin (Radcliffe) who went on to the Cambridge. Many of the patients were in wheelchairs and we used to go back to the ward after lunch and take (or was it race) them down into Wheatley village to the pub - all the locals were great with the patients - happy days.

To complete the story - I searched out Jean Grieve near Plymouth on holiday with my wife in 2006 as it was my 50 years in nursing - we took her out for afternoon tea and then she showed us around her house and studio in the garden - she is now an artist. It was good to say thank you after all those years.

Major Basford is the taller, darker and handsome chap in the fun photo below! 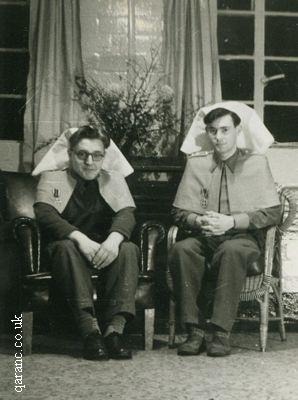 I wonder if any ex QA who may be browsing would remember the TBM ward at Wheatley Head Injury Hospital. The sister was called Guinane (sorry if spelling is incorrect); she was a brilliant ward sister. This was in late 1952, early 1953. On her ward we used oil of morrhua (cod liver oil) for pressure areas. As the patients on this ward were very poorly and had to be turned every hour the staff used to smell of cod liver oil. In the NAAFI no one was ever in doubt which ward you worked on and preferred you sat elsewhere.

On a lighter note no patient ever had a bed sore and as gloves were not used for everything in those days we all had very soft hands. Working on that ward was an experience that I could not have got anywhere else nor will I ever forget the knowledge I acquired from that wonderful sister.


Read more of Jeanne’s memories of her time in the QAs and view Jeanne’s photos on the BMH Iserlohn page and the QA Centre page.


Qaranc.co.uk thought that the current location of the former Military Hospital Wheatley had the new M40 going through it and were pleased to hear from a reader you told us:

I was checking something and came across your site. You will be pleased to hear that the M40 does not go through the site! It is just off the A40 from Oxford about one mile before the M40 starts. There is a special school called John Watson, possibly sited where your site photograph is taken, next door to Wheatley Park School, which has the two Georgian buildings incorporated into their site. There is also a substantial Sports Centre there used by the school/public and a base for the Oxon Library Service with a few garages too.

I remember clearly in 1986 some of the mizzen-huts being used for storage; they were still in good condition. I understand the last of the buildings were taken out in 2006.

Ten minutes’ walk away is Oxford Brookes University (Wheatley Campus),prior to that it was Oxford Poly and before that from about 1946 the Lady Linstead Teacher-Training College for "young ladies". Indeed my wife was there 1971-4.

The best news from your point of view is the continued existence of College Close. Staff lived in a row of houses about five minutes’ walk away from the hospital, they are still there next to tennis-courts. Again, I remember them from 1971 and they are still lived in to-day by staff, but probably mainly mature students from the University.