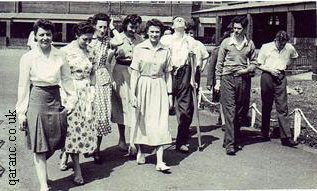 The photographs below have been kindly given to QARANC.co.uk by Caroline, the daughter of former QA Pamela Newton who served with the QAIMNS (Queen Alexandra's Imperial Military Nursing Service) that became the QARANC (Queen Alexandra's Royal Army Nursing Corps) several years later in 1952. Other postings with the QARANC included BMH Benghazi, Libya in the 1960's with her husband who was also in the army. After the couple left the army and the QAs Sister Newton returned to London to the hospital where she trained, the UCH (University College Hospital).

The photo below is of the Royal Army Medical Corps (RAMC) Corps Day tug of war competition on the 23rd of June 1949 at MBH Cowglen in Glasgow, Scotland. 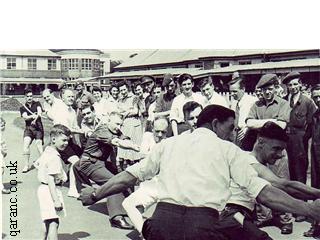 The image below is of QA Nursing Sisters sitting on the step of BMH Cowglen on the 24th of June 1949. Pictured in the middle is Sister Katie MacKay (later Katie Murray). 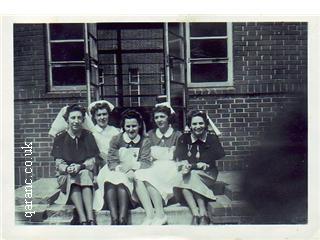 Sister Pamela Newton later married and her surname changed to Kennedy. She was posted to Trieste in Italy. The picture below is of two nurses sitting on the step of Trieste in 1950. 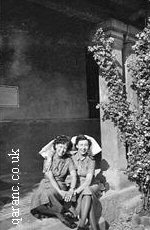 The photograph below is of the officers celebrating New Years Eve in Trieste in 1950. QA Sister Pamela Newton is second from the right.

The studio shot below belonged to Sister Pamela Kennedy (nee Newton) and she had written on the back of the photograph which is scanned below the image. It reads:

Pat Sterling: Fell out with Queen Mary whilst modelling a new QA uniform. Sent to Triest as a punishment?!! 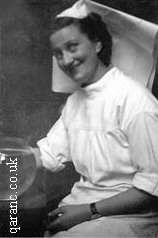 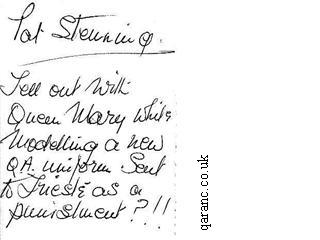 One of the visitors to Qaranc.co.uk is seeking some information about the painted mural at Cowglen Military Hospital. She used to admire it when she visited her aunt, Miss Mary Latta Henderson QAIMNS, who was the Matron in 1948 and 1949. Miss Henderson had previously served during World War Two in India and Burma prior to this post. The mural was in either the sitting room or dining room of Cowglen Military Hospital and was possibly of a matador scene. If you can help with any info or have a photo of the mural please contact QARANC.co.uk Thank you.


The building was latterly used for continuing care for elderly patients. The wards closed and services moved to the Southern General Hospital in 2000. The hospital was demolished in 2001 and its address was Cowglen Road, Glasgow G53 6XJ.


Sadly none of the QARANC.co.uk team had a Scottish posting and would love to expand this page with more details about this former army hospital and include more pictures. If you are a former or serving member of the Queen Alexandra's Royal Army Nursing Corps we would love your help.


The mention of BMH Cowglen brought back some fond memories. I served in the RAMC there during my National Service days 1956 to 1958. A pal and I were employed as telephone operators in the Hospital Office Block. The civilian operators had a dispute with the authorities regarding working the night shifts. As a result we were trained by the civilian operators and carried out permanent night duty! I remember just two QA nurses there at the time Sylvia Woolcock and Gay Jones. No photos of the dear old place I'm afraid.I wonder if anyone remembers our little NAAFI canteen that was located in a modified Nissen hut in the corner of the grounds? There were the usual canteen facilities, a little kiosk which was mainly devoted to the sale of cigarettes etc, we even had a jukebox on the left as one entered the canteen. Happy days indeed. How I wish that I could turn the clock back! My late wife and I took a nostalgic trip around the place some years ago which brought a tear to my eyes!!!! Yes, a romantic old fool! I enjoyed my two years there more than anything since. I went on to serve as a regular soldier in the RASC. On demob in 1967, being a glutton for punishment, I enlisted into the Royal Air Force as a policeman for eleven more years. Cowglen will always have a special place in my heart. John E West

QARANC think the address of the former of the BMH Cowglen Glasgow is now 10 Boydstone Road Glasgow G53 6XJ.