Picture and information about the QARANC Beret:

The Queen Alexandra's Royal Army Nursing Corps (QARANC) beret is grey in colour with a black leather binding. On the front , under the QA cap badge, is a red tear drop patch.

We are still researching the origins and history of the QARANC beret and the red coloured tear drop patch.

If you are able to answer this question and help other members of the QARANC with such answers then please Contact Us. We would also love an up to date photo of a QA nurse wearing a beret. 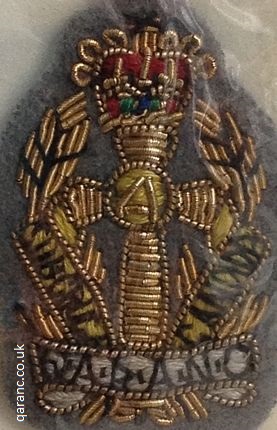 It is possible to buy a QARANC beret from online auction website Ebay where some private sellers and shops have many such QA items for sale.


If you sell a QARANC or other military berets or caps and have a shop or online store and would like it listed here for free then please contact me with information, your website and a photo.


Read about the QA Cap Badge.


The other Regiment of the British Army to wear a grey coloured beret are The Royal Scots Dragoon Guards.