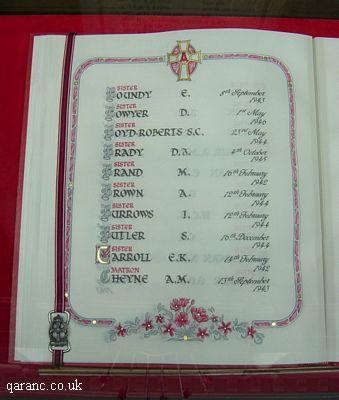 Above is a photograph of a sample page from the QAIMNS and QARANC Book of Remembrance that was held at the Former Army Staff College in Camberley until 2009 and now resides at the QARANC Chapel at the Aldershot Garrison Church (see lower page of War Graves Memorials Nurses). QARANC.co.uk would like to thank Terry Hissey for the photo.

This page from the QA Book of Remembrance reads:

The QA book of remembrance honours those QAs who were killed on active service in wartime and other conflicts. More information about books of remembrance further below.


A Service of Dedication and Turning of the Pages of the QARANC Memorial Book takes place at the QARANC Chapel of the Royal Garrison Church of All Saints in Aldershot. A wreath is usually placed at the Brookwood Military Cemetery for those members of the Corps who gave their lives in conflicts.


Turning of the Pages

The Turning of the Pages ceremony usually takes place on Corps Day, the Sunday following the Annual General Meeting of the QA Association, in September and during the QA Association Remembrance Day Service. It also takes place once a year at the QA Memorial National Arboretum. Those taking part in the Turning of the Pages ceremony can include Regular and Territorial Army members of the QARANC as well as former members of the QAs. Once the page has been turned the names of those who have fallen are read out in respect of their memory.