The official military march past of the QA's is Grey and Scarlet. It can be heard for free by Clicking Here

and then click on preview. There is also the opportunity to purchase the MP3 download, performed by the Royal Army Medical Corps Band for only 69 pence.

Or click on the play button below to hear the Queen Alexandra's Royal Army Nursing Corps March Past - Grey And Scarlet performed by the RAMC Band which is taken from the Album Soundline Presents Military Band Music - Medics In Concert.


The QARANC quick march was arranged by Lieutenant Colonel Lewis Doyle Brown MBE who at the time of composing the QA march was a Captain. It was named after the colours of the QA uniforms. Grey and Scarlet was derived from an old Irish Air called The Gentle Maiden and another old tune, Purcell's King Arthur.

Lt Col Lewis Brown (MBE), as he became, was the first Director of Music (DOM) of the Royal Army Medical Corps (RAMC) Staff Band from 1947-64. He was formerly a Bandmaster of the East Yorkshire Regiment.

The photograph below is of Lewis Brown from around 1950 when he was a Lieutenant: 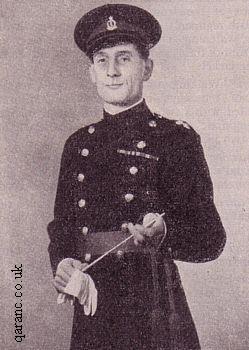 The idea of composing a special tune originated from Lieutenant General Sir Neil Cantlie in June 1948 during a Drumhead Service at the Depot and Training Establishment at Anstie Grange (cited in Queen Alexandra's Royal Army Nursing Corps (Famous Regts. S)


Colonel Edith Dyson the then Colonel Commandant of the QARANC Depot had informed Captain L.D. Brown that Professor Lewis of Birmingham had suggested the theme be taken from a chorus of the opera King Arthur by Purcell (cited in the AMS Magazine January 1951). She got together with two other QA Officers, a pianist and Capt Brown to play the intended tune.

Later Captain Brown was asked to incorporate the tune The Gentle Maiden into the QA March. He played this tune on the piano but found the time signature and rhythm not to be suitable. However whilst working on the Band arrangement for the tune King Arthur his mind kept returning to The Gentle Maiden and he found that he could incorporate the tune by making slight alterations. Captain Brown sang the new tune down the phone to Colonel Dyson the next morning and Scarlet and Grey was adopted. Captain Brown finished the musical score and the Regimental March of the QARANC was vetted by the Director-General, the Matron in Chief and the Director of Music at the Royal Military School of Music. Queen Mary then gave her gracious approval for the adoption of Scarlet and Grey and it was added to the list of Corps and Regimental Marches authorised for use by the British Army (cited in the AMS Magazine January 51).


Here are two performances of it:


The First Performance of the Regimental March Past Gray and Scarlet

It was first performed in public by the Staff Band at the opening of the QA Depot and Training Establishment at Ontario Barracks in Hindhead on the 13th September 1950. Lt Gen Sir Neil wanted the QAs to have a march past of their own whilst on parade because the RAMC had their own. The General had suggested the QAs could use the song Her bright smile haunts me still (cited in Queen Alexandra's Royal Army Nursing Corps (Famous Regts. S)

by Juliet Piggott.) This book is part of the Famous Regiments series edited by military historian Lt-General Sir Brian Horrocks and published by Leo Cooper.

More can be read about Hindhead and other QA Depots and QA Centres at the QA Centre page.


The image below is of the QA March details in the Army Orders of September 1950. It reads:

A regimental quick march for the Queen Alexandra's Royal Army Nursing Corps, entitled "Grey and Scarlet", has been approved and copies can be obtained from the publishers, Messrs. Boosey and Hawkes, ltd., 295, Regent Street, London, W.1.

Authorized bands of the regular army only are required to provide themselves with copies of this march.

The QARANC do not have an authorized slow march or bugle call.

With thanks to Terry Hissey.

The QARANC march of Grey and Scarlet was recorded by the RAMC Volunteer Band in 2005. It was then released on their latest CD, Medics in Concert which is available for £10, including p&p, from the Band at:


Please make your cheque payable to AMS Band. Below is a picture of the CD cover with a beautiful photo of the Cambridge Military Hospital and the cap badge of the RAMC. 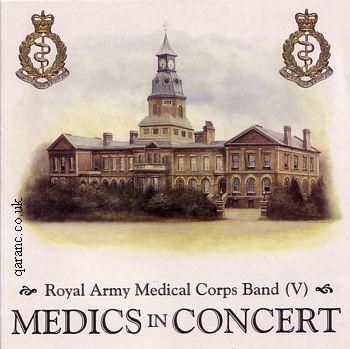 Below is an image of the music sheet of Grey and Scarlet: 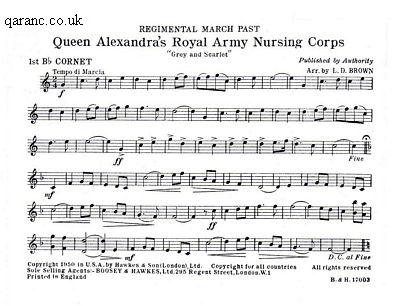 Read more about the AMS Volunteer Band at www.army.mod.uk

We would like to thank Terry Hissey for the help given to write this page about the March Of The QARANC. 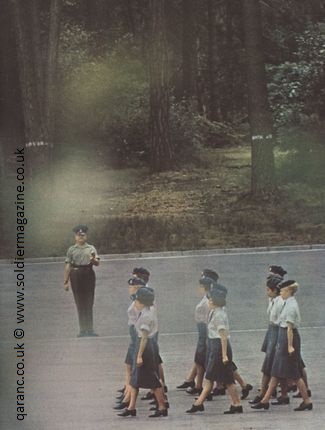 With kind permission from www.soldiermagazine.co.uk their October 1967 cover.


The Corps quick march of the QARANC is sometimes spelt Gray and Scarlet by some sources.

The Royal Australian Army Nursing Corps quick march is a combination of The Girls In Grey and Second to None.