BMH Tripoli was located in Libya. The area was captured by the Allied forces in the North African campaign during the Second World War when it was controlled by Italy until 1943. The QAs had to wait for the Royal Engineers to clear the area of Italian booby-traps before they could safely move in and set up the hospital. The area was put under British administration until independence in 1951.

cites that members of the QAs and TANS took part in the march past when the Prime Minister and General Montgomery took the salute at Tripoli in January 1943. 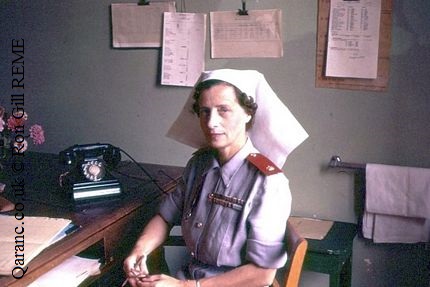 Matron of BMH Tripoli in September 1958. It is thought her name may be Salina.
Photo by Ron Gill REME

A popular bar with the staff of BMH Tripoli was run by an Italian called Agos and his wife and daughter.

After the coup of 1969 Colonel Gaddafi closed the British and American bases. This included nearby BMH Benghazi where most of the staff from British Military Hospital Tripoli had been posted too after its closure.

Qaranc.co.uk think that the original BMH Tripoli was demolished after its closure in 1966 and the area it stood on was used by the Libyan National Insurance Institution (INAS) hospital on the Collina Verde area of Tripoli on the main road to Idris Airport. In recent years this was demolished too and a Presidential palace and Rixos hotels have been built in the area.

The photo of the Matron above was taken by Ronald Gill Royal Electrical and Mechanical Engineers who was a patient and dared to ask her to have her photo taken. She agreed! Sadly, we do not know her name. If you can help then please contact me.

The contributor recalls: I was a patient in that hospital in 1960, along with 30 or so other very young children from the army garrison of 2RTR at Homs. We'd all been struck down with dysentery; all the small number of medics and ambulances were too and froing the 80 miles to BMH so my father's big black old Mercedes was pressed into service, stuffed full of ailing youngsters and a mum or two as 'nurses'. Two weeks later, after a diet of semolina and jelly (double 'yuck'), I was discharged. Memories of 'frightening' ladies in great big red and white 'hat things' haunt me even today.

She is now writing a book about the British Army in this historic province of Tripolitania post WW2 as a way of paying tribute to those men and women who served in Tripolitania, and to their wives, children and attached civilian personnel. A sociological slant will be prevalent too, looking at work, rest, play, shopping, education, schooling, medical care, interaction with Arabs, Jews and Italians. Then, lots on the regiments and units, barracks and facilities, schemes, exercises, vehicles, National service, military strategy, doctrine and politics affecting Tripolitania and the wider Middle and Near East. Much more too!