One famous QARANC officer's cloak was that of Captain Elizabeth Jilly McNair, a veteran of the Korean War and a nurse tutor. She would sew United Nations, Commonwealth badges and shoulder flashes that she collection during her QA service onto the inside scarlet lining of her QARANC officer's cloak. Captain McNair started her collection whilst a ward sister at the Cambridge Military Hospital (CMH) on the orthopaedic unit and continued to collect badges and sew them where Matron could not see them! Had she been found out she may have been invited to Matron's office for a chat without tea and biscuits! She got the idea after seeing a World War Two QAIMNS sister doing the same during her service. 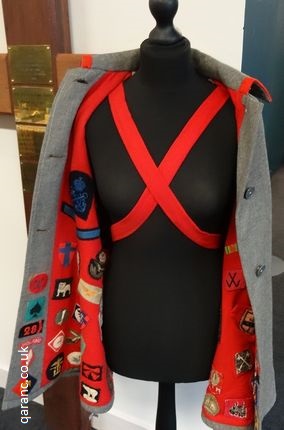 An example on display at the AMS Museum.


Fortunately Captain McNair was able to continue her valuable collection and her QARANC officer's cloak was put on display during a Korean War exhibition at the National Army Museum in 1988. The glass cabinet next to her QA cloak held the uniform of Victoria Cross holder Private Speakman VC (King's Own Scottish Borderers) that was worn on Hill 355. There is a photo of Captain McNair's QARANC officer's cloak in her book A British Army Nurse In the Korean War