The Queen Alexandra's Royal Army Nursing Corps has a history that dates back over 3 centuries. Much of this history is on display, archived and recorded at the QARANC Museum.

The QA museum was formerly found at the QA Centre then housed at the Army Medical Services (AMS) Museum at the Defence Medical Services Training Centre Keogh Barracks in Ash Vale. In 2016 it was rebranded to The Museum of Military Medicine and more information can be found on that link. 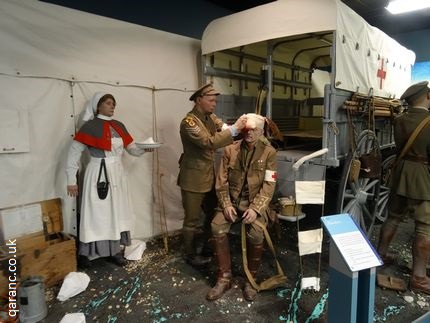 The first QA Museum was opened by Princess Margaret the QARANC Colonel in Chief on the 22 May 1959 at Hindhead, the Training and Establishment Depot. Princess Margaret was presented with a gold, diamond, ruby and sapphire brooch which was in the form of the QARANC Corps badge. The RAMC Staff Band provided a Guard of Honour and played at this formal military occasion (cited in the book Queen Alexandra's Royal Army Nursing Corps (Famous Regts. S)


To mark the final closure of the QARANC Museum at The Royal Pavilion, Aldershot prior to its move to the RAMC Museum in Keogh Barracks, Ash Vale there was an open day and fayre on Sunday 20 November 1994. Proceeds were donated to the QARANC Museum Appeal Fund.

The museum is open to the public but because it is housed in a secure barracks it is recommended that visitors contact the museum curator to arrange a convenient time to visit. The contact details are below.

The AMS Museum is open from Monday to Friday from 10am until 3:30pm. It is not open on bank holidays or at the weekend. The curator is able to organise group visits during or out with these hours. Admission is free though please do consider leaving a generous donation.

Items on display in the museum include:


Audio tape guides are available to give visitors to the AMS Museum extra information about the exhibits and items on displayed.

There is disabled access at the museum though not to the train. There is no catering facilities open to visitors. A shop sells items of relevance. There are toilets available.

The Curator of the Army Medical Services Museum is Captain Peter Starling.

The websites for the Army Medical Services Museum is
www.ams-museum.org.uk