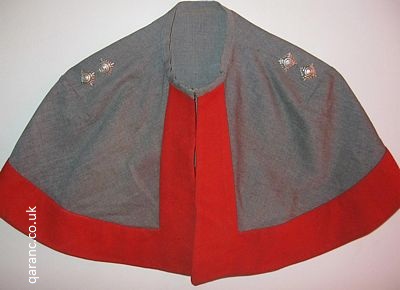 Nursing Sisters and Staff Nurses of the Queen Alexandra's Imperial Military Nursing Service Reserve wore a tippet much like the one pictured above. This one, with Lieutenant pips, would have been post 1941, when QAs were given an army commission and rank structure. Regular members of the QAIMNS wore scarlet tippets whilst the Reserve members wore grey with a scarlet edge. The QAIMNSR would have worn their silver service badge on the right side lapel of their tippet, more about these can be read on the QA Officer Medal page which explains the difference between the regular QAs and the Reserve with their R in the centre of the medal.

Original QAIMNS uniforms were supplied by Shoolbreds in Tottenham Court Road until they went into liquidation in 1931. Thereafter the QA officers purchased their uniforms from Harrods.

There are several interesting theories and their sources about why nurses wore these style of capes, dating back to WWI, and in particular why QAs wore tippets. These can be read on the why QA's wear a grey dress and beret page.


The owner of the cape in these photos thinks it is a World War Two tippet. 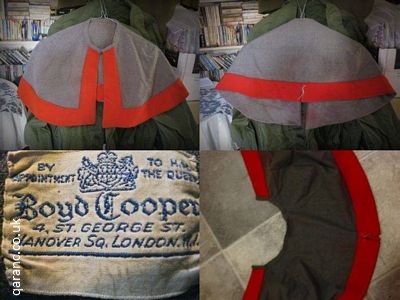 This example has a label on the back with: 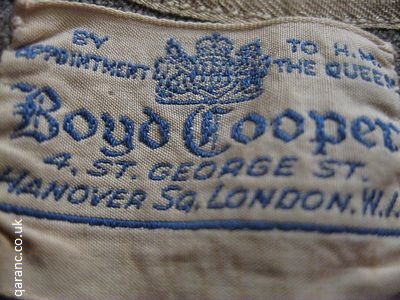 The owner would like to learn more about it, such as the date it was manufactured, why it may have belonged to an Australian nurse and if the Officer's pips were oxidised, brass or pewter. There are four holes on each shoulder so each pip has two clasps? 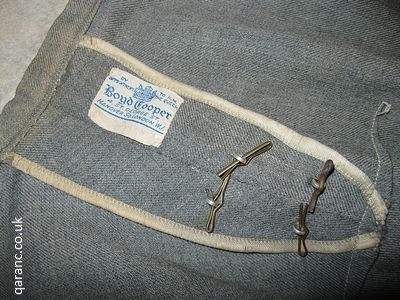 We thought that it may have been a post 1952 tippet due to the label saying By Appointment To H.M. The Queen, though the QAIMNS became the QARANC (Queen Alexandra's Royal Army Nursing Corps) in 1949, more of which can be read on the QA Corps Warrant page. So that contradicts each thought! Or were By Appointments during King George VI's reign given by his wife, Queen Elizabeth? It does look like the Queen Mother's coat of arms with two lions whilst Queen Elizabeth II has a lion and unicorn? If you can help with further information then please contact me. 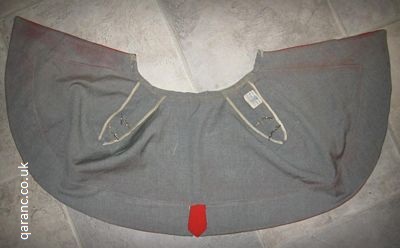 The QARANC Regimental Secretary informed the owner that the Royal Warrant in the badge belongs to Her Majesty Queen Elizabeth II which dates this garment post 6 February 1952. Since the QAs were given the Royal Warrant in 1949 then this makes the image above a Queen Alexandra's Royal Army Nursing Corps (Reserve) tippet, especially since the item is missing the small Danish Rose on the back where the threads are.

Alexandra Workwear, near Bristol, recently completed an in-depth history of Alexandra, from our early beginnings as a drapery store in Bristol in 1854 through to the multinational company that we are today. This has also resulted in a book about our history and a film archive. Please see more info here: https://www.alexandra.co.uk/the-alexandra-story

I am about to start work researching another of our group brand names, that of Boyd Cooper, a company with a far longer history than Alexandra's, dating back to 1780, when it was a high-class tailoring business creating livery garments and military uniforms to gentry and the Royal household. I came across the page you have on your website, giving images of the Boyd Cooper red-edged tippet, in which you asked for more information.

Originally based in St James, Piccadilly, Boyd Cooper was a high-class tailoring business creating gentlemen's wear, livery garments and military uniforms to gentry and the Royal household. When the Royal Warrant was created in 1840, Boyd Cooper was one of these favoured suppliers.

By the 1890's, Boyd Cooper was making the first official nursing uniforms for the newly formed nursing organisations such as the Army Nursing Service and Princess Christian's Army Nursing service reserves. Established with the patronage of the Royal Family, these organisations nursed soldiers injured during military campaigns such as the Anglo-Boer. On the death of Queen Victoria, her son Edward VII became king and his wife (the same Princess Alexandra who gave our company its name) became Queen.

In 1902, she formed the Queen Alexandra's Imperial Military Nursing Service, and it was Boyd Cooper that designed and manufactured the iconic nursing uniforms worn by their nurses in both world wars.

Sadly, we have very little information about Boyd Coopers history through its 237 year history, (it has had a few different owners over the decades), hence the reason for our research project.

I am not sure of the actual date of manufacture of the tippet you have on your website but with the owner's permission, I would like to find out more! We still have a lady in our organisation who worked for the original Boyd Cooper company and it might be that she can shine a little more light on the date it was actually made.

It may well have been supplied to volunteers who served in Australia with QAIMNS and the Australian Army Nursing Corps (AANS), during WW1 and WW2 hence the Australian connection that the owner in your original post mentioned.

During World War One, 423 UK nurses volunteered to serve in Australia together with 130 Australians who worked with Queen Alexandra's Imperial Military Nursing Service. 25 died on active service and 388 were decorated.

In World War Two, 3,477 women joined the AANS with 71 members losing their lives and 38 became Prisoners of War. 137 nurses were awarded decorations including two George Medals. In 1945, Princess Alice, Duchess of Gloucester, became the Honorary Colonel and in 1948 the service was renamed as the Royal Australian Army Nursing Service. Boyd Cooper may well have made the nursing garments for both wars.