This moving letter from a Nursing Sister working in a British Red Cross Hospital in France during World War One was written to a patient's widow. It has given much comfort to his widow and family and is reproduced here with kind permission of his granddaughter Elizabeth. 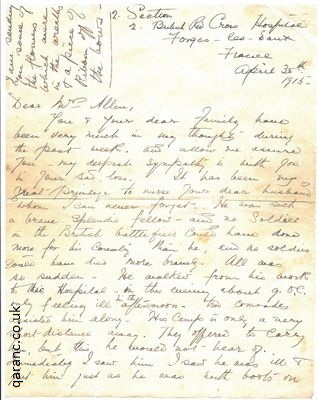 The soldier, Fred Allen, aged 42 years, was in the Veterinary Corps and the VAD nurse wrote it 4 days after his death.

His granddaughter, Elizabeth Tucker, told us:

This letter was given to me in 1962, when my grandmother Emily, widow of Fred Allen, died aged 92; she had never remarried. She had been widowed for almost 50 years and kept this very personal letter, private to her-self.

I still find the letter very intimate and emotional, the only link the present family have to an unknown grandfather.

I also find it amazing that a nursing sister during the first world war would have the time and compassion to write such a moving letter of comfort to a grieving widow; she must have been a truly wonderful and dedicated person.

You and your dear family have been very much in my thoughts during the past week and allow me assure you my deepest sympathy is with you in your sad loss. It has been my great privilege to nurse your dear husband whom I can never forget. He was such a brave splendid fellow and no soldier on the British battlefield could have done more for his Country than he, and no soldier could have died more bravely. All was so sudden - he walked from his work to this hospital in the evening about 9 o'clock only feeling ill in the afternoon. Two comrades assisted him along - his camp is only a very short distance away. They offered to carry him, but this he would not hear of. Immediately I saw him I saw he was ill and put him just as he was with boots on 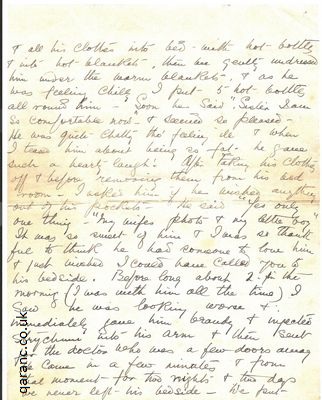 and all his clothes into bed with hot bottles and hot blankets, then we gently undressed him under the warm blankets, and as he was feeling chilly I put 5 hot bottles around him. Soon he said "Sister I am so comfortable now" and seemed so pleased. He was quite chatty, though feeling ill and when I teased him about being so fat he gave such a hearty laugh. After taking his clothes off and before removing them from his bedroom I asked him if he wished anything out of his pockets. He said "Yes only one thing my wife's photos and my little boy." It was so sweet of him and I was so thankful to think he had someone to love him and just wished I could have called you to his bedside. Before long about 2 in the morning (I was with him all the time) I saw he was looking worse and immediately gave him brandy and injected strychnine into his arm and then sent for the doctor who was a few doors away. He came in a few minutes and from that moment for two nights and two days we never left his bedside.

We put him in hot packs constantly to try to get his kidneys to act. I tried everything that possibly could be done as though if he was in London or anywhere else under the best medical skill in the world nothing more could be done by Doctor Ransom our doctor here did for your dear husband and no brother could have handled him more tenderly. I dressed him in a very nice white flannel gown and with the aid of one or two other we lifted him tenderly into his coffin, putting his head on a comfortable pillow and wrapping him carefully in nice soft sheets. On his face was a beautiful smile, as if her were speaking to you. He was not conscious very long and once or twice he addressed you "my darling wife that's lovely, that's lovey" as I pour Eau de cologne on his honoured head.

So patient and not a grumble ever escaped his lips as we tried so many things to rescue him from death and he helped us all he could. It was a blessing he did not 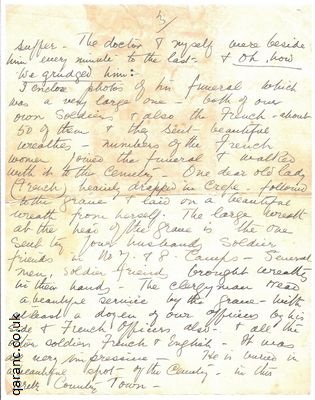 suffer. The doctor and myself were beside him in every minute to the last and oh how we grudged him:

I enclose photos of his funeral which was a very large one. Both of our own soldiers and the French, about 50 of them and they sent beautiful wreathes. Numbers of the French women joined the funeral and walked with it to the cemetery. One dear old lady (French) heavily draped in crepe, followed to the grave and laid on a beautiful wreath from herself. The large wreath at the head of the grave is the one sent by your husband's soldier friends in No 7 and 8 camps. Several men, soldier friends, brought in their hands. The clergyman read a beautiful service by the grave with at least a dozen of our officers by the side and French officers also. And all the other soldiers French and English, it was all very impressive. He is buried in a beautiful spot of the cemetery in this pretty country Town.

The wreath with the soldiers friends behind were sent by French people in Forges-les-Eaux. The writing across is "Honour (or homage) from France".

Besides the officers and men all the French people who could and helpers went to the funeral. My probationer nurses also went - 4 of them - I am in an Army Cap behind Captain Lake (the head of Camp 7) in the funeral procession - then away behind are the French soldiers and officers but so far behind that they are scarcely seen in the photo.

Now I must close and I hope that this letter may give you a little comfort in your sad hours of sorrow.

It may interest you to know I am Sister in Charge of this Hospital - if there is anything more you would like to know then let me know by return - I know your loved ones things have been sent home to you.

With much sympathy from all here.