To celebrate the 70th anniversary of the QARANC Association British Forces Philatelic Service have produced a stunning commemorative cover that highlights the work of the Queen Alexandra's Royal Army Nursing Corps. 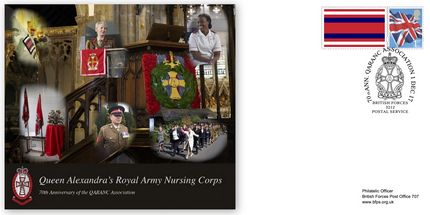 Pictured, in a collage to reflect the bond shared by Association members, are our Standards, a Health Care Assistant and a Nursing Officer, along with veterans of the QA Association on parade, marching in the grounds of the former QATC. Other images in this highly collectable cover include the Chief Nursing Officer Army talking at the 70th anniversary church service.

The Association was founded in 1947 by Dame Louisa Wilkinson DBE RRC to give support and friendship to all who are serving or have served in the Corps.

BFPS, in conjunction with the QARANC Association, has produced this commemorative cover to be released on the 1st December 2017. A special handstamp BFPS 3212 featuring the cap badge will cancel a personalised Smiler stamp which bears the Tactical Recognition Flash of the Corps. 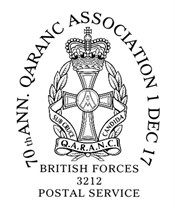 These superb covers may be ordered from the BFPS online shop at www.bfps.org.uk at a cost of just £7.50.

Also on offer will be a few sheets of the personalised Smiler stamps used on the cover, priced at £38 each.

See also Stamp and First Day Issue Cover that celebrated the 70th year of Army Nursing and also the The Ice Maiden Team.