Buy a beautiful poster of the Queen Alexandra's Royal Army Nursing Corps cap badge printed with your name, rank and years of service

The QARANC Personalised Poster provider is no longer trading. However, ex-QA, Karla, produces stunning hand-painted canvases, like the one below. These can be personalised, and previous customers have chosen to have their name, rank, regimental number and dates of service added. More Information. 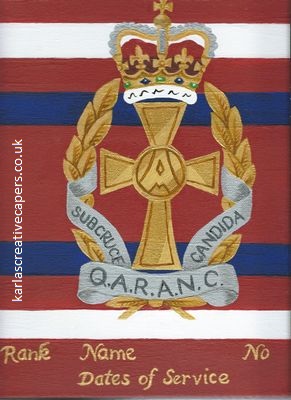 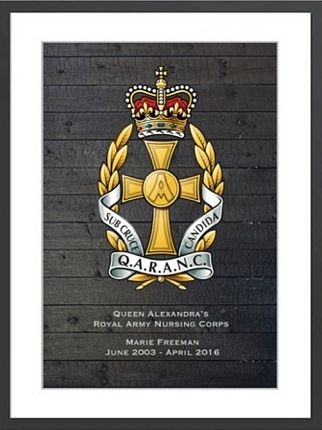 Forces Gift Store specialise in beautiful artwork of personalised posters of British Army Corps and Regiments. These make perfect presents for someone to commemorate their military career or to celebrate a promotion or passing out parade.


Each stunning poster can include name, rank and years of service along with a coloured cap badge. You can also suggest your own words to truly make this a personalised gift.

They are currently offering an A4 or A3 framed and mounted or unframed QARANC personalised poster, like the one in the photo above from just £12.