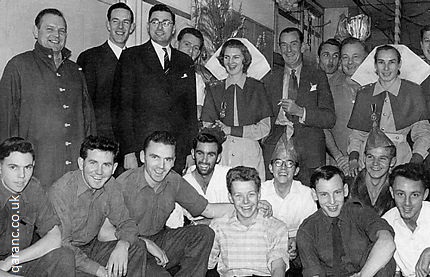 Christmas 1957. The Ward Sister in the centre of the photograph is Lt Jean Grieve who, thirty years later, became the Commandant of the QA Centre. There is another photo of Lieutenant Grieve on the Military Hospital Wheatley page. If you can help identify the other nurse, then please contact me.

BMH Benghazi was located in this second largest city of Libya. BMH Benghazi closed in February 1968 when the British Government decided to close the units serving there as a result of the six day war in June 1967. In 1969 Muammar Gaddafi (Colonel Gaddafi) led a group of Libyan junior military officers in a revolt during a six day war against King Idris who was having medical treatment in Turkey and his nephew the Crown Prince Sayyid Hasan ar-Rida al-Mahdi as-Sanussi. The British Army was ejected from the Middle East as a result of this bloodless coup when the royal family was deposed. The Libyan Arab Republic was then set up.

We were kept so busy and were so understaffed that I used to occasionally relieve the theatre sister and always made myself on call for the theatre in case of emergency. I enjoyed keeping my hand in at a form of work in which I had formerly specialised - before my captivity.


Dame Margot Turner was seconded to BMH Benghazi as temporary sister in charge and this was her first time in Africa. She describes the BMH Benghazi buildings as:

We had half an Italian hospital, which was on the outskirts of the town of Benghazi. Our Mess and Sisters' Quarters were across the road, opposite the hospital, and we had little bungalows with two Sisters in each. The Mess was hutted and the bungalows brick built. The hospital was supposed to be a hundred bedded, so we were very understaffed with only twelve Sisters. We had to put extra beds up, though, as we always had more than a hundred patients, who were all from British troops stationed in Benghazi. There was also a small hospital in Tobruk, with three Sisters.

We had the ordinary medical and surgical cases, road accidents and normal routine sickness cases that one always gets in a military hospital. We were certainly kept very busy but I found time to play quite a lot of tennis on the court attached to the Mess, and at the Officers' Club. And I started riding again in Benghazi. The horses weren't very good but an Army Riding Club was formed with the local ponies and or course there were plenty of places in which to ride.


A reader wishes to know if when Torelli Barracks closed their hospital did the staff move to the new Wavell barracks in February 1955 just off the Benina Road, which was also known as the road to the Airport, or did they completely shut it down? He knows that 35 Coy Ambulance moved and he would like to know if there was a unit still there when the Ambulance Coy moved and if not when did the barracks close down or was it taken over by a Libyan regiment. If you can help then please contact me.