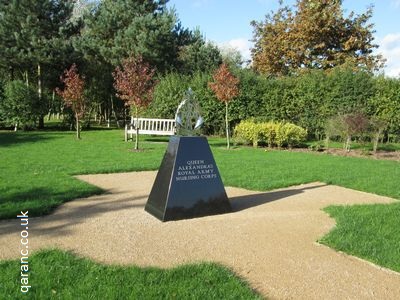 The QA Memorial at the National Memorial Arboretum (NMA) can be found at number 108 in the Purple Zone in the area between the entrance and the main buildings next to the Polish Armed Forces War Memorial and the newly relocated Ambulance men and women Memorial Garden. Do also look out for the NMA Heroes Square Paving Stone which was added in 2015. 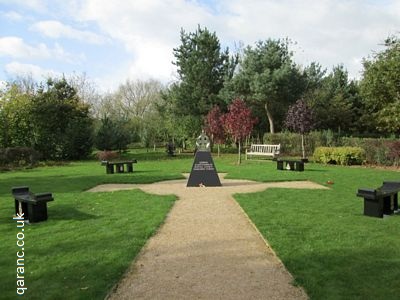 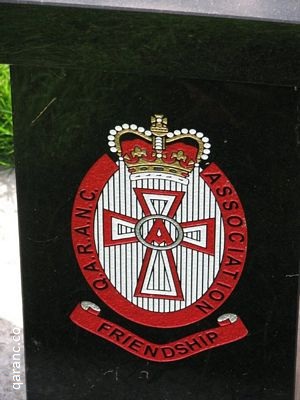 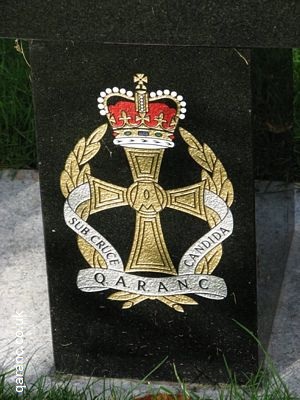 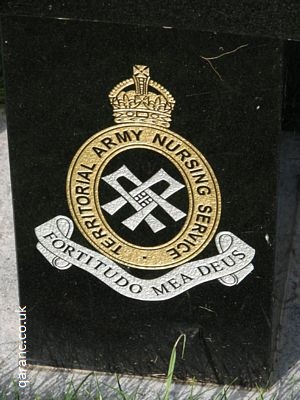 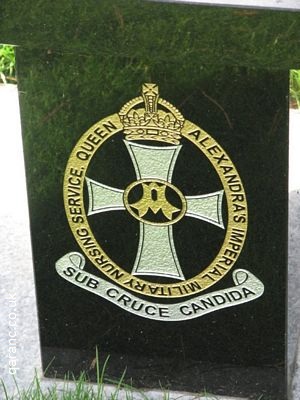 There is a blue plaque and tree in memory of WWII QA Sister Constance Nash.

The origins can be traced back to a visit to Arlington Cemetery and the National Arboretum in Washington, DC, in 1988 by the Director, David Childs. He had the idea that such concepts could be introduced to Great Britain and provide a meaningful memorial to those who have served the United Kingdom since 1945. 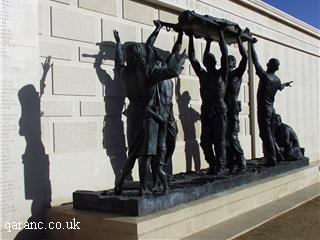 The then Prime Minister John Major launched the appeal to create it in November 1994. At this stage there was no land nor money for the project but this quickly changed when Redland Aggregates (now Lafarge) generously gifted 82 acres of reclaimed gravel working alongside the banks of the River Tame. This generous gift has now been extended to a further 70 acres which includes the wildlife lake. It was officially opened by HRH The Duchess of Kent on the 16 May 2001 and dedicated on 11th June 2002.

The design was carefully created to provide an area of peace so that visitors could have an area for peaceful contemplation whilst providing a living and growing environment for an assortment of trees and local wildlife. 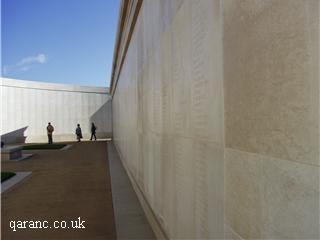 Loved ones, family members, friends and comrades can come and remember their fallen comrades in a tranquil setting. It is set within 150 acres of parkland woods and was built in central England to provide easier access to families and visitors throughout Britain and the UK. It can be found at the National Forest in Staffordshire near to the A38 and Midlands motorways at Croxall Road in Alrewas, Staffordshire.


The Armed Forces Memorial (AFM) was built in 2007 and was dedicated by His Grace the Archbishop of Canterbury on the 12 October 2007. Her Majesty The Queen, Prince Phillip The Duke of Edinburgh, Prince Charles The Prince of Wales, Camilla HRH the Duchess of Cornwall and the Rt Hon Gordon Brown The Prime Minister were in attendance.

During a parade of standards the Royal British Legion branch standards and those of Regiments and Corps were carried, though this did not include the Queen Alexandra's Royal Army Nursing Corps standard.

A buffet in a marquee was arranged for guests which included representatives of branches of the RBL and this was followed by a fly past. Bad weather conditions prevented a planned parachute drop.

There are 8 names of QAs presently engraved upon it.


The photo below is of the QARANC Memorial. The Remembrance crosses were placed by a visiting party of QA's from RCDM Birmingham: 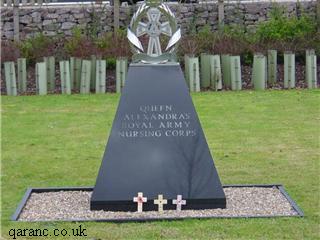 It was designed and built as a living and lasting memorial to members of the armed forces who have given their lives in the service of their country while on duty. This includes those who have died during conflicts, when training or from acts of terrorism since the end of World War Two.


This figure reaches over approximately 16,000 service men and women and each name is engraved in stone panels around its internal walls. It was designed by Liam O'Connor with sculptural elements by Ian Rank-Broadley. The nominal roll of honour can be read at Veterans UK where there is a search facility that includes name, service and serial number to make finding a relative or comrade easier. It is also a United Kingdom's living and lasting memorial for military and civilian organisations and individuals to commemorate their comrades, families and friends by way of plots and gardens or individual plaques and trees. 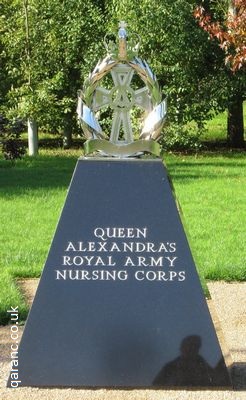 Admission is free, though to support its upkeep it is hoped that visitors will make generous donations. The staff are volunteers.


The QA Memorial is located in the purple zone of the Arboretum and assigned as number 108 and as can be seen in the photos in this article it features the white cross and QARANC emblem. Below is written Queen Alexandra's Royal Army Nursing Corps. 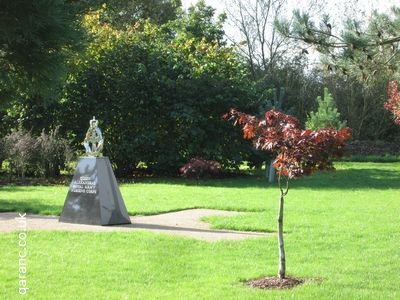 We would like to thank Mr Peter Howell, Phil Basford and Terry Hissey for taking the QA Memorial National Memorial Arboretum pictures displayed on this page.


Mr Peter Howell has also kindly helped us to trace the name and details of QAs who are honoured on the AFM and those who have died whilst in the service of the Queen Alexandra's Royal Army Nursing Corps and the Queen Alexandra's Imperial Military Nursing Service. More details by each QA can be found at the Forces Memorial website and where available their page is directly linked below. This gives the location of the cemetery, plot row and grave number in which they rest. There are 6 QARANC and 2 QAIMNS names on it. These are:


The montage below was kindly produced by Peter Howell and contains the 8 QA's names with their corresponding panel numbers: 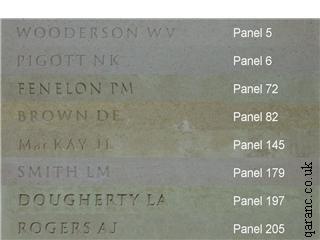 The photograph below is of Panels 5 and 6 showing Winifred Wooderson's and Norah Pigott's names: 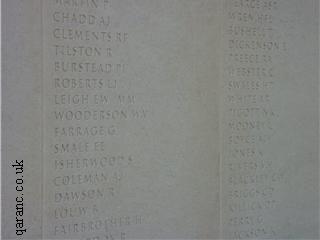 The QAs below are also be on the Roll of Honour that was on public display in the Chapel of the Royal Hospital Chelsea, London. It is now on display at the QARANC Chapel at the Aldershot Garrison Church. Listed are their name, rank, corps and date of death (DOD): 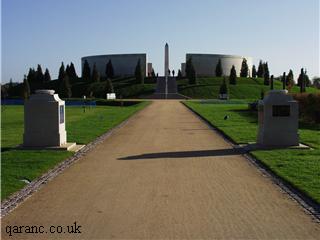 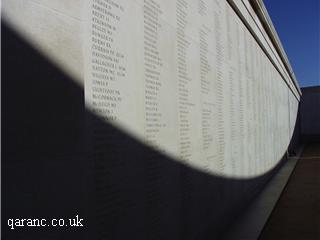 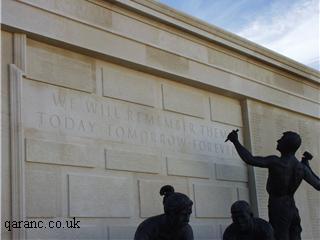 Other areas of interest to fellow QAs include the Far East Prisoners of War Building which displays the names of each FEPOW.

The url homepage link to the official website is www.thenma.org.uk and they also use the web site thenma.org.uk both of which are run by the Royal British Legion.

The television programme showed the construction of it and the producers interviewed the families of men and women who were honoured on it and they talked about what the AFM war memorial meant to them.

It also told some of the stories behind the names of those listed and showed clips of the opening ceremony.


Hotel Accommodation Near to the National Memorial Arboretum

For those looking for hotel accommodation near to the National Memorial Arboretum please try the Three Queens Hotel in Burton Upon Trent. It is about seven miles from it and is managed by an ex-serviceman and Falklands veteran. Visit www.3queenshotel.co.uk for more information.


The NMA Nursing Memorial honours those who gave their lives in service.