Match For Heroes football match in memory of Sgt Gareth Thursby and Private Thomas Wroe who were killed in Afghanistan, takes place on Sunday 29th April at Ossett Albion, Wakefield at 11am. The money raised will be split between the Yorkshire Regiment Benevolent Fund and the Army Benevolent Fund, as well as funding a bench at the National Arboretum for both soldiers. 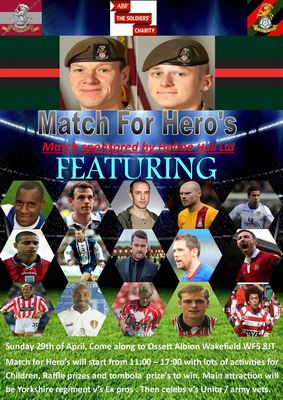 The Yorkshire Regiment plays against ex-professional footballers and celebrities such as some of the cast from Emmerdale. There will also be attractions for the family such as a bouncy assault course and inflatable slide, an auction which includes signed sports memorabilia and a two-day package to Skipton, including hotel and meals throughout the break.