History of British Military Hospital Nairobi in Kenya and memories of the staff who served at BMH Nairobi: 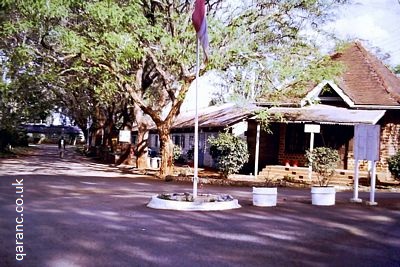 Jim Glynn was a radiographer at British Military Hospital Nairobi Kenya from 1962 to 1964 and kindly shared his memories and photos:

I was posted BMH Nairobi as a radiographer in Feb 1962. I was the Corporal in charge of the department from 1963. My co-worker there was Corporal Tony Holden (now Hampson-Bough). I was best man at his wedding in Aldershot to another member of the BMH, Lt Carol Gibb. Another memorable sister there was Sheila Davies. I remember all the characters mentioned by Don Johnson (see below). A few more are Jim Sharrock – CSM, Captains Maize and Ashcroft, Tommy Allsop and Norman Cruickshanks (Path Lab). My best friend, Jimmy McGuire, took the first two of the BMH Nairobi shots (top of the page). He is now sadly no longer with us. The BMH Nairobi entrance on the right shows the flagpole with the RAMC flag in the centre. The exit is on the right and the road leading away from the shot to the left goes to the canteen and billets (bandahs). You would pass the NAAFI and then the camp cinema on your right. 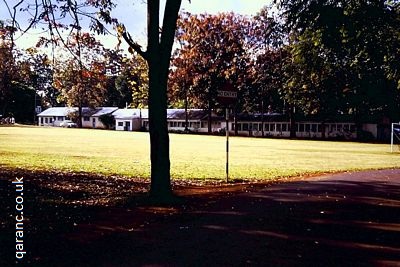 Above is the sports field. Opposite are the wooden buildings that were some of the wards and clinics. The perimeter road ran past the top side of these buildings then ran on to two of the only stone buildings. One was the theatre and the other was my X-ray department. The only other stone building on the site housed the company offices. 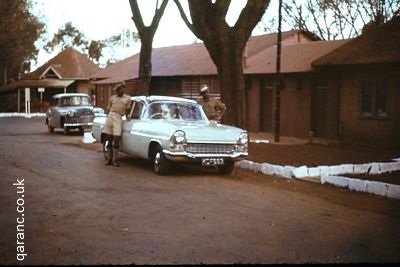 Two Askaris leaning on my Velox (KDF 663) in BMH Nairobi. The main entrance is on the right, just behind the old Hillman Minx. This would have been taken around mid-1962. 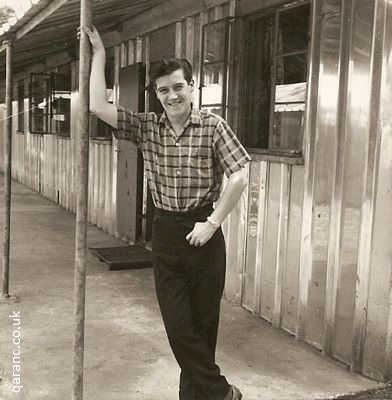 This was taken outside my billet.

More of Jim’s photos can be seen on the Royal Herbert page.


BMH Nairobi was about five miles outside the city and was a sprawling wooden building. I arrived there in November 1960 and worked first in the Company Office but one day we got news of two new officers being posted in. Lt Chivers would become Company Adjutant with Major Moore, the Medical Specialist as Commanding Officer.

The second was one that was known to every RAMC recruit in the late 1950's Lt. David S Rowlands who used to be the Depot RSM and he came as our Quartermaster and Fire Officer. I was appointed as Fire NCO.

Unlike most units which had an electric alarm system we used one of those wartime hand-cranked sirens but there were several signals on it. One was the traditional up and down wave which was for a fire, in which case all hell broke loose with the fire crew getting the trailer fire pump ready to go anywhere in the unit that the land rover could take it. Another was the long steady tone (the wartime all clear) and this was used for a Crash Emergency call out but this could very easily be a plane crash at the local airport (about 15 miles away).
The main area of the hospital was the football field with all of the buildings being set out around it with the wards on the far side to the main entrance.

While I was there we saw a procession going past along the main road and it was the release of Jomo Kenyata from imprisonment.

After a couple of months I moved from Company Office to Reception which was at one side of the main gate, on the other side was the telephone exchange, manned by African operators - try explaining something that was not in their usual arrangements, such as when we had an admin inspection. We knew that there would be a fire practice but Lt Rowlands and I thought (incorrectly as it turned out) that the Inspecting Officer would warn one of us and he would warn the other. WRONG! I was across the other side of the football field when the fire siren went. I ran across to the siren operator who told me 'Fire in the Path lab' I ran up to the fire shed and found that my fire crew already had the pump working and were running the hoses out.

The Inspecting Officer's report read: Fire crew had water on in 1 minute 30 seconds, in 7 minutes two fire engines from Kenya Fire Brigade arrived followed one minute later by Nairobi police and then at 9.5 minutes a very much out of breath reporter from the Daily Nation wanting to know where the colossal fire was. I explained to the fire brigade and police who told me that it had been a good practice. The police officer told me that he had realised that he can't beat the fire brigade after all and when I asked what he meant he said he had always believed that they could beat the fire brigade but their two engines passed him on the highway and left him standing but he was doing 80. The senior fire officer told me that he had found that their radios were not as good as he thought. He had tried to contact No 2 machine as soon as they left the station but finally got through to them when he was at our main gate with No 2 trying to disappear up his exhaust pipe.

I was in Reception one morning when Major Moore came in and told me to go for lunch then get a list of equipment ready. This was at 11.30 so I went for lunch and he had arranged for an early lunch for me. I got the equipment ready and he came over and asked if we'd had a call from the RAF so I told him that we hadn't then he told me that he and I were going as an Air Ambulance to collect a patient and just then the RAF called and he and I set off to RAF Embakasi and found that they had a Twin Pioneer plane ready for us. We set out and after a couple of hours we landed at a tiny gold mining village in Tanganyika where we found that the patient had Cerebral Meningitis, Cerebral Malaria. We collected him at about 3pm and he had been given 3gr of Largactil at 10.30 so Major Moore reached in his bag and gave him 3gr intra-muscular Sodium Amytal. Once we got airborne the patient was thrashing and almost punched out the side of the plane so we quickly gave him 7.5gr of Intra-muscular Sodium Amytal and applied a Manifold harness but he snapped one of the straps. We finished up having to hold him most of the journey but as soon as he was in the ambulance he settled quietly and was unconscious for two days. Then about 7 days after we brought him in he came into Reception and apologised for being a problem during the fight and told me that he was going on sick leave and guess where to - the same place where we picked him up.

Also In Kenya was 24 Brigade and one of the problems was that 24 Brigade had to be in camp by 01.00 hours while at the hospital we had to be in when next required for duty. One or two of our lads were picked up by 24 Brigade Provo by mistake and this caused the Provo to get some very interesting but un-publishable comments until they finally got the idea that it was best to ask first. Don Johnson RAMC 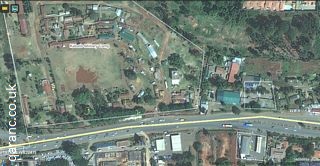