History of the Army School of Physiotherapy

We are grateful to Len Asplin who trained at the ASP 1973 to 1977 and retired from the Army in 1995 for this guest article and welcome further information.

In 1905 the Incorporated Society of Trained Masseuses (ISTM) was approached by the then Matron In Chief, Queen Alexandra's Imperial Military Nursing Service (QAIMNS), Miss Sydney Brown who enquired whether nursing orderlies from the RAMC based at Netley could be examined by the Society. The nursing orderlies instructor was Miss Wills who assured the Society that those trained were of thoroughly good character. 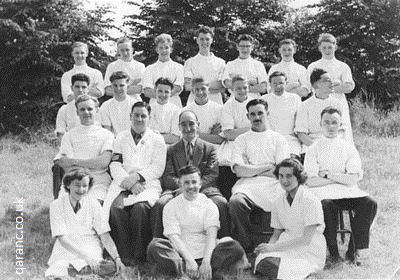 The photograph above is the 1954 set, the last set to start training at Netley.

The QAs sitting on the ground are Private Joan Brigden on the left and on the right is Corporal Ann Stewart. In between them on the grass is Pte Wyndon Stacey, RAMC. 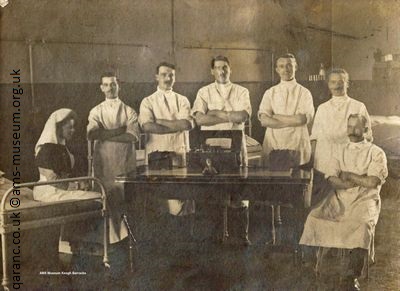 
Len's research to date has identified that in 1946 there was a Royal Army Medical Corps School of Massage based at Netley. Sometime between 1946 and 1949 this became the Army School of Physiotherapy. Both RAMC and QAs were taught at the School and they sat Army physiotherapy exams (Parts 3, 2 and 1). The School moved to the Royal Herbert Hospital Woolwich in 1955. Training for QAs was discontinued after the 1961 set and in 1962 civilians were admitted to the School.

One of a series of recruitment posters thought to be from the 1950’s. 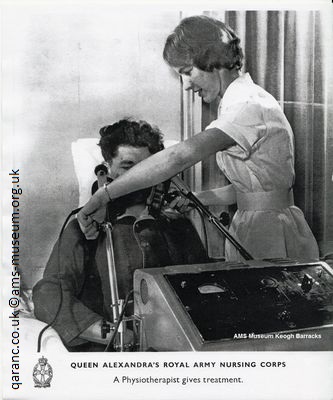 
Len's article continues at the website of the Chartered Society of Physiotherapy historical images. 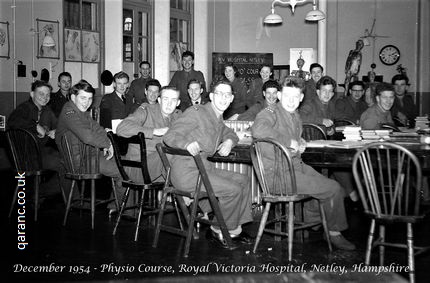 1954 in the old classroom at Netley, taken just before Christmas when they left for the last time. After Christmas, in the New Year, the school was moved to the Royal Herbert Hospital, Woolwich, where the 1954’s set photograph was taken in August 1955, before they all went their separate ways.

In the classroom photo Ted is the second person from the left, at the back, and to his left is Cpl John Skerratt, RAF, who was later appointed Superintendent Physiotherapist at the RAF Hospital Ely in Cambridgeshire, with the rank of Squadron Leader. 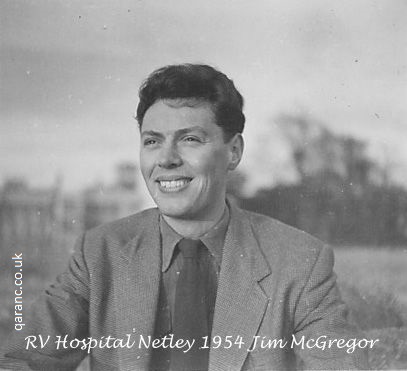 Jim McGregor is pictured in the portrait above, taken in the grounds of RV Hospital Netley in the Autumn of 1954. He can also be seen standing at the back, taller than anyone else in the first photograph. This photo was taken, using Ted’s camera, by one of the teachers, probably Sgt. Wakeford, who is also in this group photo taken at the Royal Herbert Hospital, Aug 1955.

Ted appeared in this photo to the left of Sgt Wakeford who was sitting to the left of Mr Smith, the Principal of the School. Cpl Skerratt is at the far right of the same row.

After training Ted served in RAF Hospitals before leaving to work in civilian hospitals, professional sports clubs and private practice. During the last ten years before retirement in 1998 he went back to the military, as a permanent civil servant this time, and connected with CMH Aldershot. 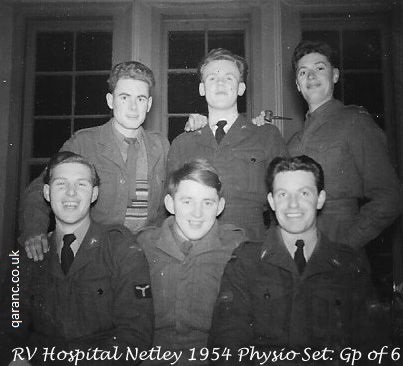 A group photo of six of the 1954 set, with Jim McGregor top right. To his right is Cpl John Skerratt, RAF. In the front row are two of the RAF men, flanking a Welsh Royal Army Medical Corps student who played rugby for Llanelli. 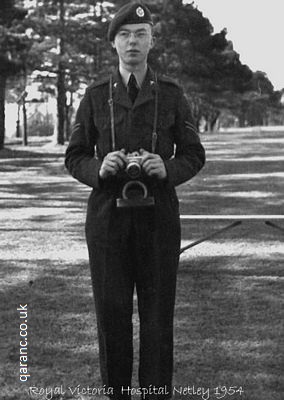 Ted in the Netley Hospital grounds, taken in 1954, holding the camera with which he took the above photographs. 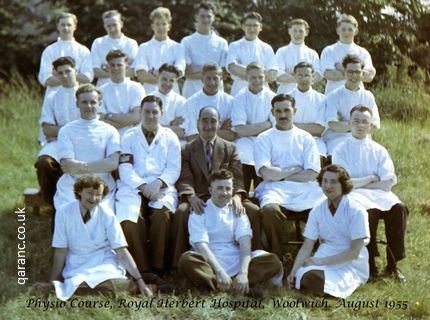 A colour version of the August 1955 group photo in the grounds of the Royal Herbert Hospital, Woolwich.