Information about Hospital Ships used by the British Army during the World Wars and the Falklands War:


These have been used by the military to evacuate and treat army personnel until they could be transferred to military hospitals and treatment centres. The first recorded was the Red Rover in 1860 during the American Civil War. British forces have also used them to medically or surgically treat members of the Army, Navy and RAF. They have also been used for humanitarian operations throughout the world and are often called Mercy Ships for this reason. Other names for them include Navy Ambulances or Floating Ambulances. 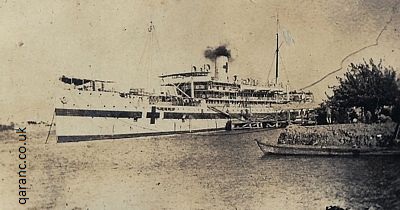 Though predominately staffed by members of QARNNS and QARNNS(R) - the Queen Alexandra's Royal Naval Nursing Service and the Reserves members of the QAIMNS have nursed aboard hospital ships alongside their Navy comrades.


The book The Roses of No Man's Land

by Lyn MacDonald has several photos of the Hospital Ship Essequibo and the QA Sisters who served aboard her tending the sick and wounded from Gallipoli.

has extracts of the war diaries of Nursing Sisters who served aboard hospital ships and hospital carriers during the Second World War. This included Hospital Carrier Isle of Guernsey during the evacuation from France in 1940.

Donald Johnson served with the RAMC and has kindly provided the additional information about the Britannic:

There were the major ones bearing proud and famous names such as the Olympic, the Mauretania, the Aquitania and the ill-fated Britannic which was sunk when it stuck a mine just off Kea Island in the Aegian Sea on 21st November 1916, and sank in just 50 minutes.

She was the younger sister of Olympic and of the ill-fated Titanic and, when we realise that Titanic had a 300 feet long gash on her Starboard side which breached the first 5 of her water-tight compartments yet she survived for 2 hours and 40 minutes, when we consider the changes that were made to both Olympic and Britannic the difference in her survival is amazing and has led to a multitude of ideas many of them accusing Germany of evil acts and an equal number accusing Britain of breaching the Geneva Convention by the carrying of arms and explosives but neither is correct.

A thorough underwater study of the vessel by Dr Robert Ballard of the United States gave no evidence of a major explosion that would have occurred if explosives had been involved. What his studies showed was a double action of human error.

The ship was on her way to collect her 6th intake of over 3,000 casualties from the Dardanelles and Turkey when:

2. It was the final day of relaxed routine and it was breakfast time and the nursing staff had cleaned the wards and got everything ready prior to going for their final breakfast together, which they would not be able to do once they had patients aboard but, as nursing staff have done for years, they opened all the portholes (windows) to air the wards, and most probably wedged the doors open to get a through draft, both were actions that were prohibited in the theatre of war, and both were equally effective in destroying the water-tight integrity of the ship since those same doors were designed to be part of the water-tight integrity of the vessel.

However, the only casualties were the occupants of one lifeboat that, soon after its' launching, was sucked into the still turning propeller and all were killed.

Cunard Liners had the esteem of holding the Blue Riband award for the fastest ships to cross the Atlantic until Germany were honoured with the award in 1898 for the ship Kaiser Wilhelm der Grosse. They kept hold of the Blue Riband award for several years with liners such as the Deutschland and the Kronprinz Wilhelm. As a result Britain subsidised the building of faster liners with Cunard on the understanding that they would be used as troop ships in the event of a war. This resulting in the building of turbine engine powered liners called the Mauretania and then the Lusitania which was launched in 1907. Cunard then developed a liner with even greater speeds, the Aquitania, which was to be used as a hospital ship in World War One and then a troop ship in the Second World War.

The Aquitania was launched on the 21 April 1914 at the Clydebank shipyard of John Brown & Co. Ltd with a launch weight of 22,000 tons. It was so large that the Clyde had to be dredged and then widened. After sea tests the Aquitania made her maiden voyage on the 30 May from Liverpool to New York with Captain William Turner at the helm. The Aquitania could carry 3230 passengers and 972 crew. The Aquitania arrived at New York on the 5 June and her average speed was 23.1 knots.