Elizabeth Sinclair, known as Bess, lived in Edinburgh. She is the nurse standing at the front in the middle of the union Jack in this photo from, World War One. On the back of the photograph is written Belmont 11.11.18 - Armistice Day 1918 at Belmont. 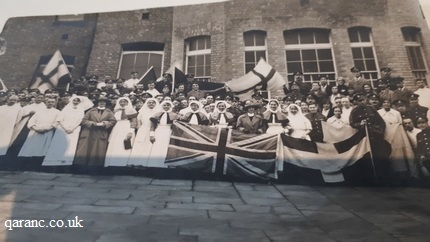 Does anyone know the whereabouts of Belmont? If so, please contact me.

It is thought by two readers that it may be either the Red Cross Auxiliary Red Cross Auxiliary Hospital called Belmont in Llandudno in Wales or, as in the photo below, the Belmont Military Hospital for German Prisoners of War during WW1. It was based at Sutton in Surrey in what had been the Workhouse buildings and did not become a hospital proper until after the Second World War. 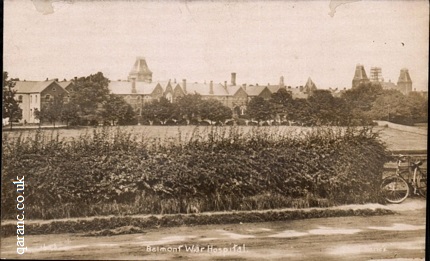 
Bess served as a military nurse in both World War One and Two.

Below is Elizabeth on the left where she served in WW2 on the Hospital Ship St Andrew at Dunkirk and Italy. The three scarlet stripes demonstrate that she was now promoted to an Assistant Matron. 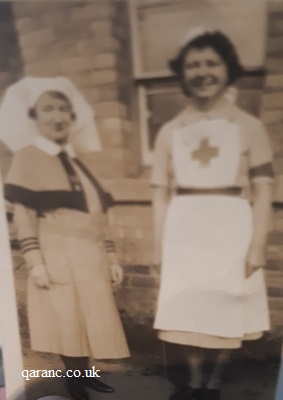 On the 24 January 1944. HS St Andrew was part of a convoy, along with the Hospital Ships St David and Leinster, where they had taken wounded off the Anzio beach-head on the west coast of Italy. They set sail at about 1730 hours. After four miles their black-out was lifted. St David was leading with Leinster in the middle and St Andrew in the rear. It was hoped that enemy planes, ships and U-boats would then see that they were hospital ships and obey the Geneva code. Unfortunately, the weather turned rough and St David was hit, and the patients and crew had to evacuate into the sea. Several months later, American Nursing Corps Second Lieutenant Ruth Hindman was interviewed by the Daily Telegraph. She said:

It must have been about eight o'clock, when we were 20 miles out at sea, that I heard a crash. We all ran up on deck with our lifebelts, and we were told the ship had been hit and we must take to the boats. We did our best with the wounded. Fortunately, a good proportion of them were walking casualties. It all seemed one confused rush, and then the ship began to heel over, and we were told to jump for it.
SHARE
© Site contents copyright QARANC.co.uk 2006 - 2022 All rights reserved.
Privacy/Disclaimer Policy