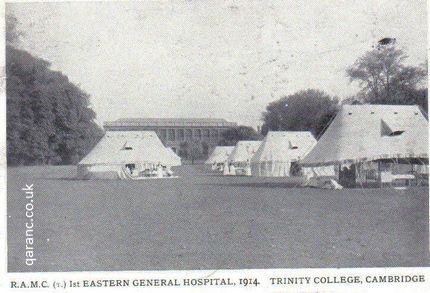 This postcard shows the patients in their hospital blues as well as members of the Royal Army Medical Corps Territorial and Queen Alexandra's Imperial Military Nursing Service (Reserve). They were officially sold in the hospital and village and others depicted patients and nurses in the hospital gardens.

The area that the World War One tented hospital was set up is now the University Library. As WWI progressed wooden huts were built on the cricket field to form a larger hospital. The first patients were admitted on the 17 October 1914 and over 70,000 casualties were treated. By 1915 there were over 1500 beds.

There is a video and more information at www.cam.ac.uk