Field Ambulance No.4 in France World War One


Sister Kate Luard QAIMNSR is posted in April 1915 during the First World War to Field Ambulance No.4 in France - Battle of Festubert Diary Extracts


Katherine Evelyn Luard was born in 1872. After training as a nurse at the prestigious nurse-training school of King's College Hospital, London, she offered her skills to the Army Nursing Service and served for two years in South Africa during the Second Anglo-Boer War.

On August 6, 1914, two days after the British Government declared war on Germany, Kate enlisted in Queen Alexandra's Imperial Military Nursing Service Reserve. During her first year in France and Belgium she served on the ambulance trains until, on April 2, 1915, she received movement orders to report to the Officer Commanding at No.4 Field Ambulance. This brought her close to the front line and she referred to this as 'life at the back of the front'. Here she also worked in an Advanced Dressing Station.

A Field Ambulance was a mobile front line medical unit for treating the wounded before they were moved to a casualty clearing station. It would include stretcher bearers, nursing orderlies, tented wards, operating theatre, cookhouse, wash rooms and a horsed or motor ambulance. The field ambulances set up and supplied Advanced Dressing Stations which were basic care points providing only limited medical treatment and had no holding capacity. The wounded were brought here from Regimental Aid Posts which were only a few metres behind the front line in small spaces such as a support or reserve trench.

During her entire time as a nursing sister in France 1914-1918 Kate sent letters, whenever time permitted, to her family at home and the following are extracts from those she wrote during April and May 1915.

Please note that although Field Ambulance No.4 was stationed at Festubert the dates of the actual Battle of Festubert were 15-27 May 1915. It followed the Battle of Aubers Ridge and was part of the Second Battle of Artois. Field Ambulance No.4 was situated at Festubert and evacuated as Kate describes further below on May 22nd to a position further back from the front line, we do not have more information about the unit's movements.

So hell became heaven and here I am at railhead waiting for a motor ambulance to take me and my baggage there.

11 A.M. Had an interesting drive here through a village packed with men billeted in barns and empty houses--the usual aeroplane buzzing overhead, and a large motor ambulance convoy by the wayside. We are in the town itself, and the building is labelled No.4 Field Ambulance Dressing Station for Officers.

Still Good Friday, 10pm. (Kate spends a luxurious night in a château where generals and officers are usually billeted.)

Have been on duty all day. They [the wounded] are nearly all evacuated in a few days, so you are always getting a fresh lot in.

I found my own new billet this morning before going on duty; it is a very old little house over a shop in a street off the big Place. It is a sort of attic, and I am not dead sure whether it is clean on top and lively underneath, but time will show. 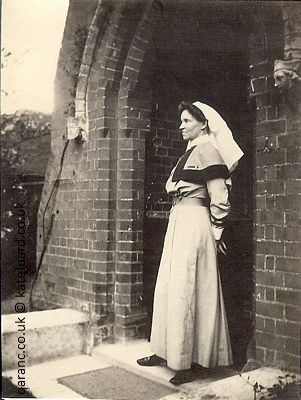 We are busy all day admitting and evacuating officers. A very nice Brigade-Major came in, in the night, with a shell wound in the shoulder. This morning a great jagged piece was dug out, with only a local anaesthetic, he stuck it like a brick, humming a tune when it became unbearable and gripping on to my hand.

I was off at 5pm and went to Beuvry, the village two and a half miles away that was shelled last week; it is about half-way to the trenches from here. Met and passed an unending stream of khaki, the men marching back from their four days in the trenches, and all steadily trudging on with the same coating of mud from head to foot, packs and rifles carried anyhow, and the Trench Look which can never be described, and which is grim to the last degree. Each lot had a tail of limping stragglers. They said they'd had a very "rough" night last night - pouring rain - water up to their knees, and standing to all night expecting an attack which didn't come off; but some mines had been exploded meant for their trench but luckily they only got smothered instead of blown to bits.

It is difficult to settle down to sleep to-night: the sky is lit up with flashes and star shells, and every now and then a big bang shakes the house, above the almost continuous thud, thudding, and barking of the machine-guns and the crackling of rifle firing; they are bringing in more to-day, both here and at the hospice.

This afternoon I saw a soldier's funeral, which I have never seen before. He was shot in the head yesterday, and makes the four hundred and eleventh British soldier buried in this cemetery. The French gravedigger told me there was another to be buried this afternoon. It was very impressive and moving, the Union Jack on the coffin (a thin wooden box) on the waggon, and a firing party, and about a hundred men and three officers and the Padre. It was a clear blue sky and sunny afternoon. The graves are dug trenchwise, very close together, practically all in one continuous grave, each with a marked cross.

We have been admitting, cutting the clothes off, dressing and evacuating a good many to-day. There is a great noise going on to-night, snapping and popping, and crackling of rifle firing and machine guns, with the roar of our 9.2's [9.2 inch Howitzer guns] every few minutes.

The noise is worse than anywhere in London. The din that a column of horse-drawn, bolt-rattling waggons make over cobbles is literally deafening. And the big motor-lorries taking the "munitions of war" up are almost as bad. These processions alternate with marching troops, clattering horses and French engines all day, and very often all night, and in the middle of it there are the guns. To-night the rifle fire is crackling.

10 p.m.-a pitch-dark night, raining a little, and only one topic-the Attack tomorrow morning.

The first R.A.M.C. [Royal Army Medical Corps] barge has come up, and is lying in the canal ready to take on the cases of wounds of lung and abdomen, to save the jolting of road and railway.

4 a.m.-the 9.2's are just beginning to talk. I have been cutting dressings all night.

The Lions [French guns] are roaring in full blast and lighting up the sky. 5.25 a.m.-It has begun. It is awful-continuous and earthquaking. It began before 5 with a fearful pounding from the French on our right, and hasn't left off since. Had a busy night, and in every spare second getting ready for the rush.

9.30 a.m.-We have had a night of it. Every field ambulance, barge, clearing hospital and train are blocked with them [the wounded]. … went down to the barge. It was packed with all the worst cases-dying, bleeding and groaning. After five hours we had three-fourths of them out of their blood soaked clothes, dressed, fed, haemorrhage stopped, hands and faces washed, and some asleep. Two died and more were dying.

6.30 p.m. My little room is crammed with enormous lilac, white and purple, from our wee garden, which I am going to take to our graves tomorrow in jam tins.

11 a.m.-Can't face the graves today; have had an awful night. I found the boy who brought his officer in on Sunday night, crying this morning over the still figure under a brown blanket on a stretcher.

1.30 a.m. The sky on the battle line tonight is the weirdest sight; our guns are very busy, and they are making yellow flashes like huge sheets of summer lightening. Then the star-shells rise, burst, and light up a huge area, while a big searchlight plays slowly on the clouds.

5 a.m.-Daylight-soaking wet, and no more shells since 2 a.m. There is an officer in tonight with a wound in the hand and shoulder from a shell which killed eleven of his men.

Tension up again like last Saturday. Another TAG is happening tomorrow.

They began coming in at 3.30 and by 8 a.m. the place was full to bursting. We managed to get all the stretcher cases to bed, and as many of the others as we had beds for. There are hundreds more to come in, and the seriously wounded generally get brought in last, because they can't get up and run, but have to hide in trenches and shell holes. They were all sopping wet with blood or mud or both.

Another night of horrors. It was a long whirl of stretchers, and pitiful heaps on them. The sergeant stayed up helping till 3, and a boy from the kitchen stayed up all night on his own, helping.

The order came to the A.D.M.S. [Acting Director of Medical Services] to evacuate the whole of the Field Ambulances, and within about two hours this was done. Everybody got the patients ready, fixed up their dressings and splints, gave them all morphia, and got them on their stretchers. The din of our guns, which were bombarding heavily, and the German guns, which were bombarding us at a great pace, and the whistle and bang of shells that came over while this was going on, was a din to remember.

Kate receives orders to join an ambulance train on Wednesday, May 26th, but these orders were then cancelled and she is posted for duty at a base hospital.

To read about Kate's time on the ambulance trains 1914-15 go to www.kateluard.co.uk and click on Blog for entries which were posted on the same day as the events of 100 years ago.

Read our review of Unknown Warriors The Letters of Kate Luard RRC and Bar.