During the First World War there were many Auxiliary Hospitals throughout Great Britain run by nurses and nursing assistants of the British Red Cross and the Order of St John of Jerusalem. 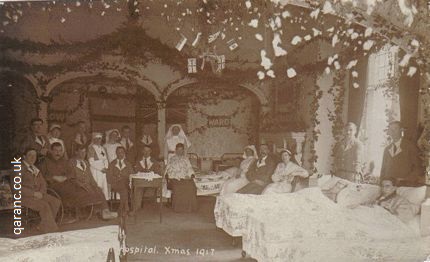 They worked together under the Joint War Committee and attached to Central Military Hospitals caring for wounded soldiers from France and Belgium. The above copy of a postcard is Abbots Ripton Hall and is just one example of the thousands of buildings that were needed to house the frontline injured so that they could convalesce and get treatment. Other buildings used included other stately or private homes and schools. The War Office had offers from over 5000 building owners and had to assess their suitability in terms of location, staffing and patient care.

They were staffed by locals either as nursing assistant or cook, Voluntary Aid Detachment and local doctors and surgeons. Each auxiliary hospital had a Matron in charge of the nursing staff and who also oversaw patient care, a Commandant who was in charge of the hospital and a Quartermaster. I'm not sure of exact figures, but have read that there were over 3000 Auxiliary Hospitals during the Great War, each of which was given a grant towards costs from the WO.

Below are links to images and further information about some of these WWI Auxiliary Hospitals:

Convalescent Homes For Railwaymen Herne Bay (Used as a Military Hospital in WWI.)


Dumfriesshire in the Great War

has details of the many Auxiliary Hospitals of that region, including Moffat, Drumlanrig and Langholm.