Moss Side Red Cross Military Hospital (RCMH) began life as a very grand house built for Thomas Harrison, a Merchant trading in Africa, and his family in the 1830's. He died in early 1840 and by 1872 the family sold the estate. Rex Harrison, the actor, was a descendent of this family. 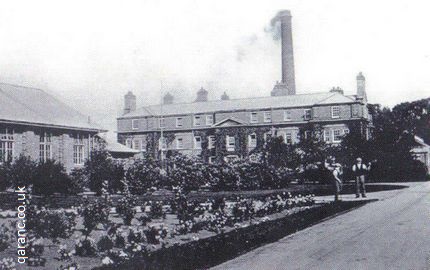 It was purchased in 1878 by the overseers of the Liverpool Workhouse - The Liverpool Select Vestry and was initially used as a convalescent home for girls and then only boys. By 1911 after various plans for the building had been turned down, it was decided to develop the home as "a colony for epileptics" of which there were 300 in all.

The Mental Deficiency Act of 1914 came into being and more people found that their conditions put them under the care of that Act. By July 1914 the partially extended hospital and estate was sold to The Lunacy Board Of Control as a State Institution For Defectives - but, before this could be implemented, the hospital and estate was taken over by the War Office with the approval of the Home Secretary.

It was renamed The Military Red Cross Hospital, Moss Side and was to be used for shell shocked military personnel. The first 20 soldiers were admitted on 7 December 1914. Many of the original staff stayed on, but finding that they had no control over military personnel , most left to be replaced by a military guard! 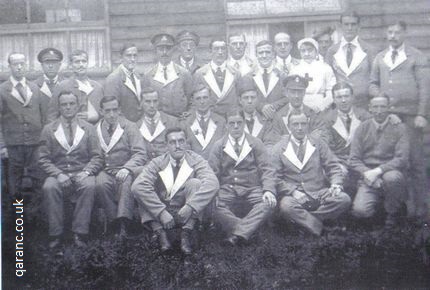 Male staff who remained became part of the Royal Army Medical Corps on 17 July 1915 - BUT they continued to wear Red Cross uniform.

Dr R Rows; Professor Elliot Smith; Mr T H Pear and Dr W H R Rivers were appointed by the Medical Research Council to run the hospital and treat the casualties. After a year, in 1916 Dr W H R Rivers, now well known for his involvement with Siegfried Sassoon, moved his work to the Craiglockhart Psychiatric War Hospital in Edinburgh.

The continuation of World War One meant that male staff were now being called up officially and posted to other theatres of conflict, to be replaced by female staff. By 1917 any leave due to staff was reduced to 7, from 17 days a year.

Conditions for patients and staff deteriorated. Wards became unsanitary and patients behaviour more difficult to manage. Following on from "questions in The House", work on the estate farm was implemented for patients that brought about an overall change for the better. Shell shock casualties were still being admitted in the first half of 1919.

The Military Hospital was handed back to the Lunacy Board in August 1919 and became an overspill hospital for Rampton and Parkhurst Prison. The overall site became Ashworth Hospital in1989 and the Moss Side site closed in 1995.

With grateful thanks to Dr John K Rowlands in Liverpool for this article which is from his newsletter called Moss Side Remembered, in 1995.