During the 1914 - 1918 Great War soldiers and those at the frontline were issued with fibrous identity discs which were worn around the neck, often with a good luck charm like a cross, and usually tied by a piece of string. 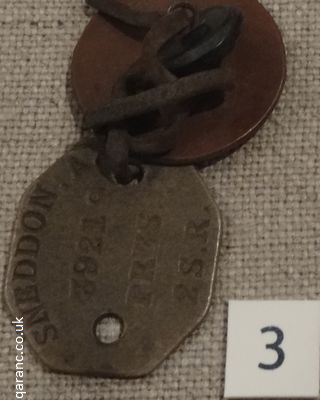 This example above is on display in the National War Museum at Edinburgh Castle.

Sadly the damp conditions of the trenches often rotted them. Many corpses were difficult to identify, especially those who were shipwrecked. They were nicknamed cold meat tickets. They were stamped with the serviceman's regimental number, initials and surname and religion. 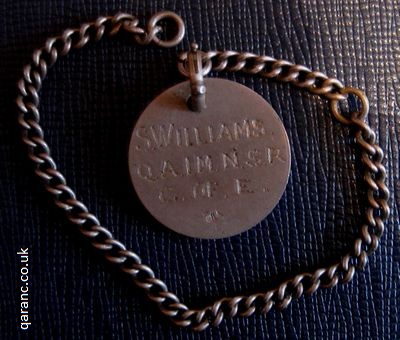 Oddly from 1907 to August 1914 ID discs were made from aluminium with the soldiers' name, rank, serial number, unit details and religion stamped on it. Perhaps the cost to issue these to the vast number of men mobilised necessitated the cheaper ID discs. Prior to 1907 soldiers would carry an identity card in their uniform pocket.

The 1909 Field Service Regulations instructed that the disc be removed from bodies, which made later identification even more difficult. For this reason two discs were introduced in August 1916, though The Quick and the Dead by van Emden, Richard

describe this implementation as being from the Army Council Instruction of September 1916. They were of two different shapes and colours. A green octagonal one would stay with the body whilst the red round one would be removed from the body for administration purposes (cited from What Tommy Took to War, 1914-1918

which also has a photo of the red and green ID discs). 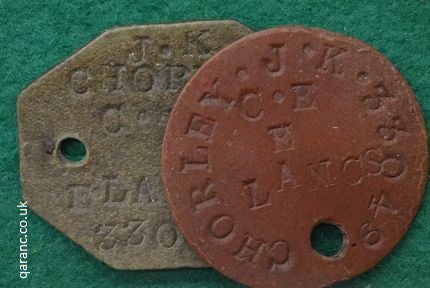 These are on display at Eden Camp in Yorkshire.

describes these dog tags as being 35mm and of vulcanised asbestos fibre.

Because of their fragile state many soldiers and indeed members of the QAs had their own, often using local coins such as a Franc at the Western Front, made out of metals like silver or copper and worn on their wrists as a bracelet. Some would also add their issued fibrous identity discs. There is an example of this in the lower section of the Queen Mary's Army Auxiliary Corps page.

The fine example of an engraved silver World War One ID Bracelet above belonged to Nursing Sister Williams of the Queen Alexandra's Imperial Military Nursing Service Reserve. It was given to a reader in the 1970s when he was at Durban, South Africa. He thinks the reverse coin is Islamic. It reads 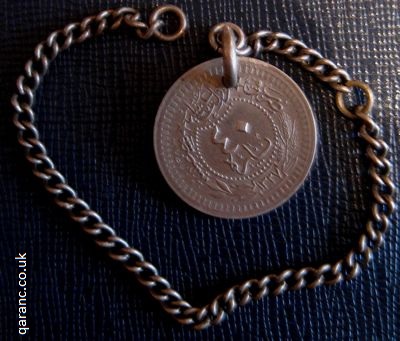 If you can help with further information please contact me.

The Quick and the Dead by van Emden, Richard

describes the distress such a silver identification caused a mother when her soldier son asked her to forward one to France:

I knew what it stood for as I looked at it. It stood first and foremost for the fact that the boy who in himself was all earth and all heaven to me was in the army only one among many thousands, perhaps among many hundreds of thousands. It stood for a fearful confusion in which masses of men might get inextricably mixed up so that none could know who this fellow was; and it stood for a field on which there were many dead lying, and for grim figures walking about among those dead and depending for their identifications on some token worn by the still shapes whose lips would speak no more. All this passed through my mind while I packed up the little disc and chain.