From September 1916 Army Order 316 instigated that servicemen and women who had been honourably discharged due to injury, wounds or illness during World War One would be awarded with a silver war badge. They had to have served at least seven consecutive days. It was round and had a pin in the back so that it could be proudly worn like a brooch. Each was numbered on the back and on the box so that now it is easy to look up silver war badge records to see who it was issued to and why at the National Archives. Bearers were also issued with a certificate. King George V had authorised it to honour those who served in the United Kingdom and overseas since the start of the Great War on 4 August 1914. We think is stopped being issued well after WWI, in 1922. Approximately 1,150,000 badges were issued and there were several issues and types awarded over the years. Members of the Royal Air Force and Royal Navy had the prefix RAF and RN. 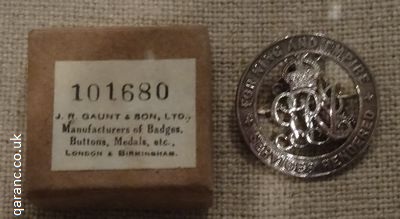 This photograph example above is from the first issue and is on display at The National War Museum at Edinburgh Castle.

The SWB badge has the Royal and Imperial Cypher of King George V of the United Kingdom GRI (Georgius Rex Imperator) Services Rendered For King and Empire and bore the King's initials with a crown.

It was also known as the discharge or wound badge as well as the services rendered badge. It was also issued to those who served in the Great War for previous years of 1914 and 1915. It helped prevent men and women of service age being seen as cowards by organisations and individuals such as the white feather movement and helped them prove they had done their bit. They could wear it on their civilian clothes, usually on the right breast, but were forbidden to wear it on military uniform. The War Office did not replace them if they were lost or stolen, but found ones were easily returned due to the numbering system. Approximately 1,150,000 were issued. In later years civilians, such as the Queen Mary's Army Auxiliary Corps and the Voluntary Aid Detachment were awarded it.