Below is the Honourably Discharged Served with Honour Certificate from King George V for Rifleman Stroud who served with the 21st London Regiment during the First World War. 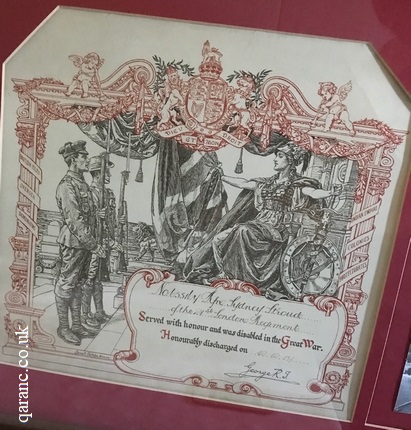 At the top of the Kings Discharge Certificate crest is Diev Et Mon Droit which translates from Latin as God and my right and is the motto of the monarch. The figure of Britannia on her throne is to the right.

The writing wrapped around the column on the left says, British Isles, Oversea and Dominions, whilst on the right is written Indian Empire, Colonies and Protectorates.

To the right of the soldiers with their rifles and bayonets is written NO. 653164 (or 7) Rfn (Rifleman) Sydney Stroud of the 21st London Regiment. Served with honour and was disabled in the Great War. Honourably discharged on 12/12/1917.

It was then signed by King George V.

At the boots of the soldier is the artist's details of Sir Bernard Partridge. He was a popular cartoonist in Punch magazine

The certificate from the King would have also been awarded along with the Silver War Badge.

See more photos from the collection of Rfn Stroud on the following pages: